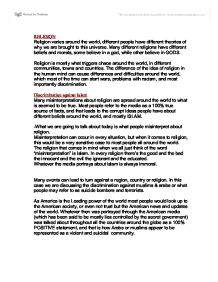 In this case we are discussing the discrimination against muslims & arabs or what people may refer to as suicide bombers and terrorists. As America is the Leading power of the world most people would look up to the American society, or even not trust but the American news and updates of the world. Whatever then was portrayed through the American media (which has been said to be mostly lies controlled by the secret government) was talked about throughout all the countries around the globe as a 100% POSITIVE statement, and that is how Arabs or muslims appear to be represented as a violent and suicidal community. ...read more.

Osama bin Laden: "I was not involved in the September 11 attacks in the United States nor did I have knowledge of the attacks. There exists a government within a government within the United States. The United States should try to trace the perpetrators of these attacks within itself; to the people who want to make the present century a century of conflict between Islam and Christianity. That secret government must be asked as to who carried out the attacks. ... The American system is totally in control of the Jews, whose first priority is Israel, not the United States." "it is reported that more than half of Americans believe that Saddam Hussein Is responsible of the terrorist attacks of 9/11. this means that the U.S. media have utterly, spectacularly, shamefully, and pathetically failed." ...read more.