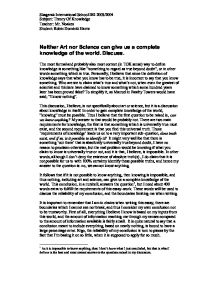 Neither Art nor Science can give us a complete knowledge of the world. Discuss.

Neither Art nor Science can give us a complete knowledge of the world. Discuss. The most formal and probably also most correct (in TOK sense) way to define knowledge is something like "something to regard as true beyond doubt", or in other words something which is true. Personally, I believe that since the definition of knowledge says that what you know has to be true, it is incorrect to say that you know something. Who are we to claim what's true and what's not, when even the greatest of scientist and thinkers have claimed to know something which some hundred years later has been proved false? To simplify it, as Manuel in Fawlty Towers would have said; "I know nothing". ...read more.

In other words, although I don't deny the existence of absolute truth(s) , I do claim that it is not possible for us to with 100% certainty identify these possible truths, and hence my answer to the question is: no, we cannot know anything. It follows that if it is not possible to know anything, then knowing is impossible, and thus nothing, including art and science, can give us a complete knowledge of the world. This conclusion, in a nutshell, answers the question1, but I need about 400 words extra to fulfill the requirements of this essay-work. These words will be used to discuss the reliability of my conclusion, and the boundaries limiting me when writing. ...read more.

The second boundary is the capacity of my mind. The limits of my cognitivity makes it fairly "wrong" to make conclusions about something as "big" as knowledge and absolute truth. I believe that what I perceive is information, and the conclusions I make based on what I perceive is nothing but new information, and, as said by Albert Einstein, "Information is not knowledge". With this said, I can change my conclusion from "nothing can give a complete knowledge of the world", to a very simple: I don't know. 1 As it is impossible to know anything, then I don't know what I just concluded, but that is what I believe is the best and most correct answer to the questions raised in my discussion. Skagerak International School IB2 2003/2004 Subject: Theory Of Knowledge Teacher: Mr. Noakes Student: Robin Dominik Havre ...read more.