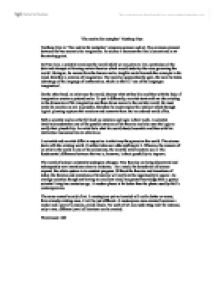 Northrop Frye in The motive for metaphor compares science and art. The common element between the two seems to be imagination. In science it becomes the final element and in art the starting point.

'The motive for metaphor' Northrop Frye Northrop Frye in 'The motive for metaphor' compares science and art. The common element between the two seems to be imagination. In science it becomes the final element and in art the starting point. In Frye view, a scientist examines the world which we are given to live, scrutinises all the data and attempts at forming certain theories which would underlay the rules governing the world. I doing so, he moves from the known realm, tangible world towards the concepts in his mind, therefore a creation of imagination. ...read more.

He must make his creation as real as possible, therefore he must employ his intellect which through logical planning captures the emotions and converts them into an ordered world of his. Both a scientist and an artist fall back on intuition and logic in their work. A scientist intuitively undertakes one of the possible streams of his theories and also uses the logic to verify their plausibility. An artist feels what his world should resemble and then with his intellectual resources tries to achieve so. A scientist and an artist differ in respect as in what way they perceive the world. ...read more.

Without the theories and inventions of today, the theories and inventions of tomorrow will not have the opportunity to appear. An average scientist, though not having an excellent mind, has greater knowledge than a genius scientist living two centuries ago. A modern phone is far better than the phone used by Bell's contemporaries. The same cannot be said of art. A masterpiece yet not created will not be better or worse, from already existing ones, it will be just different. A masterpiece once created, becomes a model and a part of a cannon, called classic. No work of art can outdo King Lear for instance, only a new, different jewel of literature can be created. Word count: 468 ...read more.