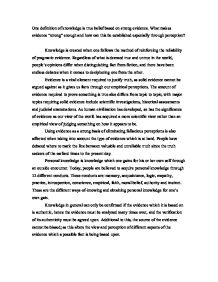 One definition of knowledge is true belief based on strong evidence. What makes evidence &quot;strong&quot; enough and how can this be established especially through perception?

One definition of knowledge is true belief based on strong evidence. What makes evidence "strong" enough and how can this be established especially through perception? Knowledge is created when one follows the method of reinforcing the reliability of pragmatic evidence. Regardless of what is deemed true and untrue in the world, people's opinions differ when distinguishing fact from fiction, and there have been endless debates when it comes to deciphering one from the other. Evidence is a vital element required to justify truth, as solid evidence cannot be argued against as it gives us facts through our empirical perceptions. The amount of evidence required to prove something is true also differs from topic to topic, with major topics requiring solid evidence include scientific investigations, historical assessments and judicial examinations. As human civilization has developed, so has the significance of evidence as our view of the world has acquired a more scientific view rather than an empirical view of judging something on how it appears to be. Using evidence as a strong basis of eliminating fallacious perceptions is also affected when taking into account the type of evidence which is at hand. People have debated where to mark the line between valuable and unreliable truth since the truth seekers of the earliest times to the present day. ...read more.

Expert and authority testimony can both be viewed as dubious evidence under the support of trust. Candidly, trust may strengthen controversial evidence, but I believe there are still large gaps of reasonable doubts that this kind of evidence does not cover. Forced to bend the line that I have already begun to draw, I rotate the direction of my thoughts towards the field of science. Distinguished by their consistent approach to knowledge, the science sociality always seem to strive for the most solid and authentic evidence to justify their theories. Trying to uncover the origin of its popularity, I found myself examining science's fundamental scheme of acquiring evidence � the scientific method. The overwhelming success that scientific evidence has obtained in the justification of truth is, in my belief, the result of rational reasoning and empirical testing. The linkage of evidence and hypothesis in a scientific experiment are always restricted by rigorous rules, so that all facts, or evidence, must be logically relevant to the experimentation. A good example of this would be: the controlled experiment, where a monitored environment prevents the incorporation of unrelated article that could jeopardize the precision of the outcome. However, with all the technical jargon and concepts that is sometimes grasped by so few, why do the public still trust the intricate scientific proofs that almost seem mystical? ...read more.

Like I have stated before, at the time of the trail, scientific evidence was overwhelmingly popular, because it is more compelling. However, the prosecutors were unaware that forensic science can be a double-edged sword. While most convincing evidence are strong evidence, we cannot neglect the fact that, not all of them can cover up every area of doubt. "Every addition [of evidence] opens up one more potential defense loophole." Evans' view, to me is very rational. Because we cannot re-act every part of history, and human technology can not find every exact point in the universe, finding the perfect and indubitable evidence is just too infrequent. This imperfection of evidence can only be minimized, but cannot be eliminate, this eventually will result in few controversies. As we find better ways of finding stronger knowledge, the frequency of the controversies will also decrease. Subsequently, I believe, relevance, authenticity, objectivity and creditability are all strong factors in the acquirement of strong evidence, which ultimately affects the validation of knowledge. With different situation and within different fields of study, the degree of these four factors that determines strong evidence may vary, because of the difference in how truth is viewed. In this essay, I have presented my own view and draw my own line which may incorporate my own personal predisposition, but I believe, parts of my mark will still remain on that spectrum as genuine knowledge. ...read more.