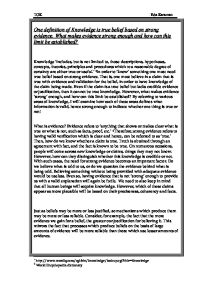 One definition of Knowledge is true belief based on strong evidence. What makes evidence strong enough and how can this limit be established?

One definition of Knowledge is true belief based on strong evidence. What makes evidence strong enough and how can this limit be established? Knowledge 'includes, but is not limited to, those descriptions, hypotheses, concepts, theories, principles and procedures which to a reasonable degree of certainty are either true or useful.' 1In order to 'know' something one must need true belief based on strong evidence. That is, one must believe in a claim that is true with evidence and validation for the belief, in order to have knowledge of the claim being made. Even if the claim is a true belief but lacks credible evidence or justification, then it cannot be true knowledge. However, what makes evidence 'strong' enough, and how can this limit be established? By referring to various areas of knowledge, I will examine how each of these areas defines what information is valid, hence strong enough to indicate whether one thing is true or not! What is evidence? Evidence refers to 'anything that shows or makes clear what is true or what is not, such as facts, proof, etc.' 2Therefore; strong evidence refers to having valid verification which is clear and hence, can be referred to as 'true.' Then, how do we know whether a claim is true. ...read more.

In most scientific subjects firm evidence is available, and entitles us to view certain theories, like the theory that water is composed of H2O molecules. In other areas, however, the evidence is fragmentary and open to doubt. Through the scientific method, which involves following a certain methodology, testing results in tangible outcomes. Theories can be proven or disproved according to the results of the experiment. For example, when completing chemistry practicals no one really questions the validity of this knowledge due to the fact that what is said sounds credible. The theories have been proven valid several times resulting in if not same similar results. Dalton's atomic theory is just one example of a claim that is rarely questioned due to its validity. Hence, every time an experiment is conducted the validity of the theory increases. Science is a study that consists of a methodology. A scientist will conduct an experiment to prove whether his hypothesis is correct or else. Falsification is another way in which science progresses. Falsificationists believe that the progresses involved in science are not just made by trying to prove scientific laws instead consists of making up hypotheses, however, trying to prove these hypotheses as being wrong. Therefore, scientists will continuously perform experiments in order to prove their claims are valid. ...read more.

Let us take for example, 2+2 = 4, this is a very good example of something we know because reasoning can give us evidence that it is true. However, with a sentence such as ' It is cold in here,' said by someone who is in a wintry environment would be a very good example of something someone knows. When referring to experience as justifying our beliefs this does not necessarily mean that all our knowledge is founded in experience therefore meaning that all of our knowledge is justified by experience. For example, we can also come to know things, such as mathematical truths, '2+2=4' does not depend upon our senses. Even here, however, our knowledge is founded in experience for our ideas of the numbers 2 and 4 , or the addition of numbers are just as much derived from experience. Our idea of the number 2 can be derived from our experience of pairs of things. It follows then, reason and experience can both be a source of knowledge. Strong evidence is obtained through consensus. It is through consensus that what has been proposed is proved to be true or accepted. Personal knowledge or belief also plays a significant role in defining what is truth. Hence, we can conclude strong evidence as being 'strong' when it has been proven without fault and is accepted as valid by others. ...read more.