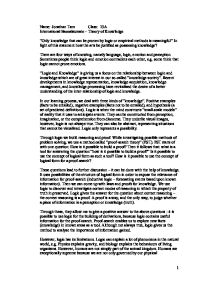 &quot;Only knowledge that can be proven by logic or empirical methods is meaningful&quot; In light of this statement how the arts be justified as possessing knowledge?

Name: Jonathan Tam Class: 13A International Baccalaureate - Theory of Knowledge "Only knowledge that can be proven by logic or empirical methods is meaningful" In light of this statement how the arts be justified as possessing knowledge? There are four ways of knowing, namely language, logic, emotion and perception. Sometimes people think logic and emotion contradicts each other, e.g. some think that logic cannot prove emotions. "Logic and Knowledge" is giving us a focus on the relationship between logic and knowledge which are of great interest in our so-called "knowledge society". Recent developments in knowledge representation, knowledge acquisition, knowledge management, and knowledge processing have revitalized the desire of a better understanding of the inter-relationship of logic and knowledge. In our learning process, we deal with three kinds of "knowledge". Positive examples (facts to be entailed), negative examples (facts not to be entailed), and hypothesis (a set of predicted definitions). Logic is when the mind constructs "small-scale models" of reality that it uses to anticipate events. They can be constructed from perception, imagination, or the comprehension from discourse. They underlie visual images, however, logic is not always true. ...read more.

Humans are exceptionally supreme because we are not only governed by our physical constructions, but also our mind (i.e. emotions). There are many occasions where our physical needs tell us to do one thing, however our emotions will force us to go against our needs. For example, when we drank too much water and need a restroom break in the middle of the lesson, our emotion tells us that either wetting our pants or asking for permission from the teacher are unlikely to solve the problem, so we go against our call of nature and wait until the lesson ends. To a deeper level, emotions can be classified into different categories: embarrassment, anger, despair, frustration and love. Scientists so far can only explain which parts of the brain contribute to such emotions, but yet they are unable to predict what are the consequences of such actions. Psychologists tried to find a pattern of such actions, but yet human minds are full of variables, and it is impossible to prove anything of emotion through logic. One way of the human mind trying to express themselves is through art works. ...read more.

Some objects or events might be useful to certain individuals, but useless to others. For example, a Terminator action figure might be of great usefulness and significance to Jonathan, a Terminator addict. However to Jimmy Chau, a Pokemon addict, might be of total uselessness. Therefore the term usefulness on Terminator figures is totally different to Jonathan and Jimmy, and might be a third way appealing to the others. Logic might be able to prove a lot of phenomena, but not all of them being proved is meaningful to us. For example, science proved by logic that the universe is constantly expanding, and will collapse after certain billion years of time. It is true that somehow logic did prove this to be a fact, however is it really meaningful to us? We might think yes it is because now human beings know more and we realise how small we are. However to most of us where we "don't care about the universe" (which most of us honestly do not) there is no meaning to us whether the universe will collapse in a billion years' time. So even science proves something to be true, it does not necessarily be meaningful. From here, another conclusion can be drawn: logic can prove knowledge to be meaningful to those who are concerned. 1 ...read more.