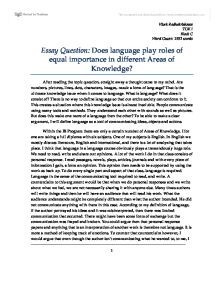 Our senses tell us that a table, for example, is a solid object; science tells us that the table is mostly empty space. Thus two sources of knowledge generate conflicting results. Can we reconcile such conflicts?

Essay Question: Does language play roles of equal importance in different Areas of Knowledge? After reading the topic question, straight away a thought came to my mind. Are numbers, pictures, lines, dots, characters, images, music a form of language? That is the ultimate knowledge issue when it comes to language. What is language? What does it consist of? There is no way to define language so that our entire society can conform to it. This creates a situation where this knowledge issue is almost insoluble. People communicate using many tools and methods. They understand each other with sounds as well as pictures. But does this make one more of a language then the other? To be able to make a clear argument, I will define language as a tool of communicating ideas, objects and actions. Within the IB Program there are only a certain number of Areas of Knowledge. I for one am taking a full diploma with six subjects. One of my subjects is English. In English we mostly discuss literature, English and international, and there is a lot of analyzing that takes place. I think that language in a language course obviously plays a tremendously huge role. We need to read, write and share our opinions. A lot of the work I do in that class consists of personal response. ...read more.

Unlike English or French or any other leaned language, there is no way to structure music or art in such a way that two people find the exact same meaning within it. When I hear a piece of music, I sit in silence and I just let the notes take control. The same is true with art. To really appreciate it, you need to be in a large space where you have all the time you need to just get a taste for the piece. I need to just stare and let my eyes feast on every inch of the work to really appreciate the beauty, effort, and energy it takes to create such wondrous things. To understand art and music, only emotion is required. I am not the greatest artist however I am able to look at art and understand what it is. I don't need to be able to play an instrument to listen to a piece and feel the music. Because language does incorporate art and music however, I have to admit that it is used. Because it is only one side of the relationship that needs to be able to "speak" it, then it shows that language is not as important in these areas of knowing. When there are two people, only one needs to be an artist. ...read more.

It is everywhere around us. Because of that, it indirectly conveys information. For example a traffic light. Math is required to build it and to get the lights to function. The finished traffic light itself doesn't contain math or numbers however numbers were very much used to create it. The traffic light is able to communicate ideas with us through the colors that it portrays. With an argument like that, some would say that math as an area of knowing does indeed require language; and a lot of it since it's everywhere. To counter the counterclaim, I would say that as much as math is everywhere and it does indirectly give us information, the relationship between me and math does not involve language at all. It involves numbers which are like letters of the alphabet. They don't share with me anything that is valuable or worth retaining. They are there for practice and for me to utilize them when trying to make sense of the world around me. In conclusion, I do not think that language plays the same role in all areas of knowledge. I think that it has the ability to allow us to communicate in all areas of knowledge, but its importance, its role, its usage is greatly varied from subject to subject and from area of knowledge to area of knowledge. ?? ?? ?? ?? 3 Vivek Radhakrishnan TOK I Block C Word Count: 1552 words 1 ...read more.