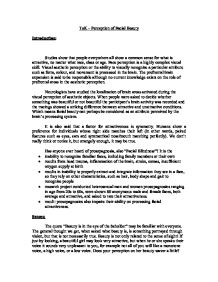 ToK - Perception of Facial Beauty Introduction: Studies show that people everywhere all show a common sense for what is attractive, no matter what race, class or age. Face perception is a highly complex visual skill. Visual aesthetic perception or the ability to visually recognize a particular attribute such as form, colour, and movement is processed in the brain. The prefrontal brain expansion is said to be responsible although no current knowledge exists on the role of prefrontal areas in the aesthetic perception. Neurologists have studied the localization of brain areas activated during the visual perception of aesthetic objects. When people were asked to decide whether something was beautiful or not beautiful the participant's brain activity was recorded and the tracings showed a striking difference between attractive and unattractive conditions. Which means facial beauty can perhaps be considered as an attribute perceived by the brain's processing system. It is also said that a factor for attractiveness is symmetry. Humans show a preference for individuals whose right side matches their left (in other words, paired features such as eyes, ears and symmetrical nose/mouth matching perfectly). ...read more.

Does your perception on her beauty waver a little? Or, if you walk closer to her and she smells very unattractive, will you still think she is as beautiful as you had thought? You can also feel beauty, using your sense of touch to 'form a picture' (or a whole) of that person. A person might have a certain skin texture that you love to feel, for example, smooth skin, a clear skin without facial hair, or you might even like rough skin. Sometimes you have to use your other senses to discover the beauty in others. Illusions of beauty As Plato once said, "Because we trust our senses, we are like prisoners in a cave - we mistake shadows on a wall for reality." Should we trust our sense of sight when judging beauty? Have you experienced a time when you saw someone from far away with long hair who appeared to be beautiful, but when you edged closer, you immediately had second thoughts? Or when you take photos at an angle you may look prettier than usual? ...read more.

It is also once said that "every culture is a beauty culture." For example: Long necked - The women of Padaung or the Kareni tribe of Myanmar extend their necks by putting copper coils around them. In their culture, very long necks are considered beautiful. It is said that the longer the neck is or the more coils the woman has around her neck, the more beautiful she is. Huli people of New Guinea - Not only woman are greatly concerned about beauty. The Huli people in the highlands of New Guinea wear bird feathers and paint their faces in bright colours mimicking the local birds of paradise while participating in festivals of clan honour. Geisha - Japanese Geisha tend to wear full white makeup with red lipstick and pinkish red eye-shadow around the eye and the eyebrows. They also tend to put their hair up in elaborate ways especially during special occasions and ceremonies. Conclusion So what exactly is beauty? Something that is perceived by only the brain or your sense of sight? Or is it all just an illusion? Perhaps it is only based on cultures. Or it could be a combination of all of the above-mentioned. So what is beauty? Well, that's up for you to decide :) -end- ...read more.