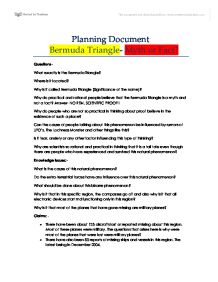 Planning Document Bermuda Triangle- Myth or Fact? Questions- What exactly is the Bermuda Triangle? Where is it located? Why is it called Bermuda Triangle (Significance of the name)? Why do practical and rational people believe that the Bermuda Triangle is a myth and not a fact? Answer- NO REAL SCIENTIFIC PROOF!! Why do people who are not so practical in thinking about proof believe in the existence of such a place? Can the cause of people talking about this phenomenon be influenced by rumors of UFO's, The Lochness Monster and other things like this? Is it fear, anxiety or any other factor influencing this type of thinking? Why are scientists so rational and practical in thinking that it is a tall tale even though there are people who have experienced and survived this natural phenomenon? Knowledge Issues:- What is the cause of this natural phenomenon? Do the extra-terrestrial forces have any influence over this natural phenomenon? What should be done about this bizarre phenomenon? Why is it that in this specific region, the compasses go off and also why is it that all electronic devices start malfunctioning only in this region? ...read more.

They had made this journey many times before and completed the journey in 75 minutes. But, this time while they were travelling, they got engulfed by an enormous lenticular cloud and somewhat went through a time vortex and completed the journey in 47 minutes. They checked the number of kilometers covered and saw that the distance covered was 250 kms! After they got out of the cloud, the sky had strips of grey lines and through that, they saw the blue sky and the Miami Beach. * The next instance is about a ship journey of Don Henry, a sea captain who had also captained tugs during the World War II. This instance happened on a journey in 1966. The thing that happened here was something that held common with every other incident. The electrical equipment drained out and the compass went haywire. Even the batteries which were bought just before departing went dry. They were surrounded by fog everywhere and it felt as if the barge was stuck to something in the ocean. Even when they accelerated the ship, they couldn't feel a thing. The horizon and the ocean looked like they were merged together. ...read more.

Hurricanes are extremely powerful storms which are spawned in the Atlantic near the equator, and have historically been responsible for thousands of lives lost and billions of dollars in damage. The sinking of Francisco de Bobadilla's Spanish fleet in 1502 was the first recorded instance of a destructive hurricane. In 1988, Hurricane Gilbert, one of the most powerful hurricanes in history, set back Jamaica's economy by three years. These storms have in the past caused a number of incidents related to the Triangle. 11. The Gulf Stream is an ocean current that originates in the Gulf of Mexico, and then through the Straits of Florida, into the North Atlantic. In essence, it is a river within an ocean, and like a river, it can and does carry floating objects. A small plane making a water landing or a boat having engine trouble will be carried away from its reported position by the current, as happened to the cabin cruiser Witchcraft on December 22, 1967, when it reported engine trouble near the Miami buoy marker one mile (1.6 km) from shore, but was not there when a Coast Guard cutter arrived. Conclusion:- So, is the Bermuda Triangle a myth or a fact? It is all based on the perception of one's mind. ...read more.