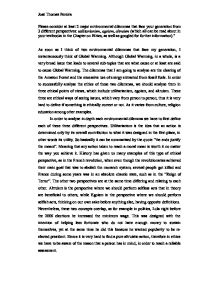 Please consider at least 2 major environmental dilemmas that face your generation from 3 different perspectives: utilitarianism, egoism, altruism (which all can be read about in your textbooks in the Chapter on Ethics, as well as googled for further information)." As soon as I think of two environmental dilemmas that face my generation, I instantaneously think of Global Warming. Although Global Warming, in a whole, is a very broad issue that leads to several sub-topics that are what cause or at least are said to cause Global Warming. The dilemmas that I am going to analyse are the clearing of the Amazon Forest and the excessive use of energy extracted from fossil fuels. In order to successfully analyse the ethics of these two dilemmas, we should analyse them in three ethical points of views, which include utilitarianism, egoism, and altruism. These three are ethical ways of seeing issues, which vary from person to person, thus it is very hard to define if something is ethically correct or not. As it varies from culture, religion education among other examples. In order to analyse in depth each environmental dilemma we have to first define each of these three different perspectives. ...read more.

So if we firstly see that people are cutting down trees for their own sake this leads us to perceive in an egoistic perspective. So if we put ourselves in the position of a lumberjack. A lumberjack lives with the income he receives when he cuts the trees, therefore if he suddenly stops cutting trees he will have no money to sustain himself and his family. An altruistic perspective of this same situation would be if this same lumberjack saw that instead of cutting the trees down to earn his money he would go around the Amazon encouraging other loggers to stop cutting down trees ignoring the economic issues involved with this considering we are already facing an economic crisis. Now if we consider a situation where thousands of lumberjacks are fired because the government has prohibited the cutting down of trees in the Amazon. This is apparently a Utilitarian perspective, as there is a situation where literally the "end justifies the mean", as the end is that the Amazon rainforest will not be deforested, although the mean is that thousands of people who work in this type of industry will loose their jobs. ...read more.

Therefore a Utilitarian perspective on this issue, would try to cease or reduce China's burning of fossil fuel, even though China could have serious electricity rationing problems. This relates to an event in History, in the Vietnam War. Where the United States of America used chemical weapons as Napalm and Agent Orange in order to attack the Vietcong, although at the time it did not think of the consequences that it could inflict in the future, and the result was that even thirty years after the War there were still babies being born with malformations. Moreover, this concept of Utilitarian perspective is also seen in economics, where externalities force governments to impose taxes or subsidies in order to reduce or increase the production of such good. Thus we see that, even though each individual has his own ethical perspective on different issues. When it comes to environmental issues, it seems that there is a common want for change, which will always favour to the side that theoretically tries to save the world. Even though, our innate feelings are mostly egoistic, however as the government is the one in charge of taking the decisions, we happen to respond in a Utilitarian to these environmental dilemmas. ...read more.