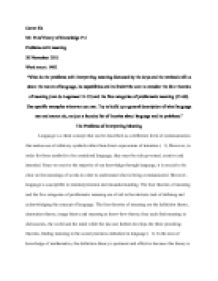 Problems With Interpreting Meaning. What do the problems with interpreting meaning discussed by the keys and the textbook tell us about the nature of language, its capabilities and its limits? Be sure to consider the four theories of meaning (van de Lage

Carter Els Mr. Fum/Theory of Knowledge P.2 Problems with meaning 20 November 2011 Word count: 1402 "What do the problems with interpreting meaning discussed by the keys and the textbook tell us about the nature of language, its capabilities and its limits? Be sure to consider the four theories of meaning (van de Lagemaat 51-55) and the five categories of problematic meaning (55-60). Use specific examples wherever you can. Try to build up a general description of what language can and cannot do, not just a laundry list of theories about language and its problems." The Problems of Interpreting Meaning Language is a thick concept that can be described as a deliberate form of communication that makes use of arbitrary symbols rather than direct expressions of intention ( 1). However, in order for those symbols to be considered language, they must be rule-governed, creative and intended. Since we receive the majority of our knowledge through language, it is crucial to be clear on the meanings of words in order to understand what is being communicated. However, language is susceptible to misinterpretation and misunderstanding. ...read more.

and involve the most remarkable assumptions, even in the case of very simple concepts, such as what counts as a possible thing," (Chomsky 29). With this in mind, these two theories can only be applied to concrete words and cannot relate to more abstract words, such as love and freedom, which can be further understood by the meaning as know-how theory. The image theory assumes that the meaning of a word is the mental image it stands for ( 1). It is constituted on each person having his or her own mental representation of an object or feeling, which is private and customized to each individual experience. Therefore when trying to communicate through language, one can never be sure if the other understands the meaning of a word in the same way (van de Lagemaat 54). For example, when a tourist asks a local for directions, the local's mental image of his own directions is based on his knowledge of the city and his own experience when traveling that city, while the tourist's mental image of those same directions could be distorted and inaccurate causing a miscommunication between them. ...read more.

Language contains both precise words and vague words because they serve different functions that are necessary for communication. Another category of problematic meaning is metaphors. A metaphor is a deliberate extension of a word beyond its normal meaning; buzz words, idioms and clich�s all derive from metaphors. Dead metaphors are phases that were originally metaphors but have become so familiar that people no longer think of them as metaphors, such as 'nightfall' and 'chair leg.' The last category of problematic meaning is irony: saying the opposite of what one truly means. Irony is another example of the versatility and flexibility of language. Language is a thick concept, one whose meaning cannot be exhausted by a simple definition; the arbitrary symbols that language is composed of are considered to be language when they are rule governed, intended and open-ended. Language's many capabilities and limits are elaborated through the four theories of meaning and the five categories of problematic meaning. Overall, language can be vague, precise, extended, inverted and can be a lot more than what one thought. Language is ambiguous, for vagueness, connotation and irony can all fall into the category of ambiguity. Regardless of its limits, language is a necessary part of life, since most of our information is retrieved through this way of knowing. ...read more.