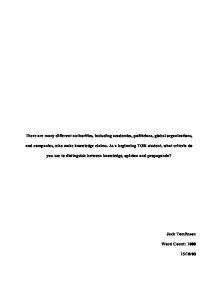 Propaganda. As a beginning TOK student, what criteria do you use to distinguish between knowledge, opinion and propaganda?

There are many different authorities, including academics, politicians, global organizations, and companies, who make knowledge claims. As a beginning TOK student, what criteria do you use to distinguish between knowledge, opinion and propaganda? Jack Tomlinson Word Count: 1000 15/10/08 In society today, humans are immersed in countless versions of media and absorb information from the media. With the quantity of the information that we take in we begin to ask ourselves regarding the validity of the information. We acquire information from reading, watching the news, or simply by ear. After acquiring information we try to distinguish between propaganda, knowledge and even opinion. All humans on this planet retain a form of opinion based on their knowledge of a particular topic. Propaganda is used as a message to alter the beliefs of the masses, by extending the truth to extreme lengths. All economic, political and social powers can create their claim by uses of knowledge, propaganda, or simply opinion and these claims attract the masses. There are several criteria in someone can differentiate between knowledge, opinions and propaganda. There are a variety of manners that one can distinguish knowledge from opinions and propaganda. In order to differentiate these concepts one has to follow the "I know that p" concept. Firstly one must ask someone with authority, or one who is in a position to know on a particular subject. From there one can determine knowledge as the expert tends to try to be as accurate as possible and as less bias as possible to inform you on what it is you are seeking to know. Secondly, it is possible to have a group consensus, by this one can look at the group's ideas on a knowledge claim, and if one is similar or the same, then you can determine if it is knowledge or opinion. Knowledge is based upon actual fact and is not formed by opinion. Thirdly, one can determine if something is knowledge by sense perception, touch, taste, hear, smell and sight. ...read more.

Thirdly, one can determine if something is knowledge by sense perception, touch, taste, hear, smell and sight. By using these senses, one can determine if a knowledge claim is indeed knowledge, or opinion or fact. For example, by putting your hand in a boiling pot, you can immediately tell by touch that your hand will heat up and burn your skin. For sight, someone can tell how far an object may be, such as a ditch, and then they can determine that they must avoid that ditch or they will fall. Additionally, you can distinguish these terms by use of logic. For example, if you look at a billboard and you see appealing colors and big images of a product, you can deduce that its purpose is to appeal to you enough to purchase it, thus leading to the conclusion that it is indeed propaganda. Furthermore by looking at the diction that a piece of material you can determine if a piece of material is opinion based or fact. By using strong words it can be concluded that that piece is most likely biased. Thus these perceptions can distinguish the difference between knowledge, opinion and propaganda. Propaganda can be distinguished from the other two concepts in various manners. Propaganda contains a message that is aimed at the masses in order to alter their beliefs and principles. In essence it uses truth, but exhibits them in a fashion that is appealing to the consumer. Propaganda itself is extremely difficult to define, as it is a concept that seems to have no boundaries. There is commercial propaganda and political propaganda. In order to determine the distinguishing features that propaganda has, you have to establish certain facts. Firstly, you have to judge whether or not the person that is talking is attempting to persuade the public to purchase or do something that is in favor of their argument. ...read more.

For example they could use Arnold Schwarzenegger maybe a supplement for muscle growth, or losing weight etc. Or they could use a highly trained professional to endorse their product. These testimonials usually use technical words or formulas that the public is not supposed to understand to highlight the intelligence of the official, thus enforcing the idea that the product must work. In essence, what differentiates propaganda with knowledge and opinion is that its sole purpose is to persuade the masses into purchasing a product. Opinion can be distinguished from the other two concepts by much simpler ideas. Opinion can be distinguished when someone reveals information that is more than the facts. This information is the opinion that the person has on the topic. Additionally, one can distinguish opinion when someone reveals only one side of an argument without looking at the other side of the bridge. For example, presenting a topic on Robert Mugabe, the tyrant of Zimbabwe, he is described today as the African Hitler, even donning Hitler's mustache. He has lead Zimbabwe down the path of destruction etc. However those critics forget that he was once a respected and good leader until power got the better of him etc. As such if someone does not take both sides of the argument, then he is one sided and thus his arguments are generally opinionated. Lastly, word choice can tell if a statement is fact or opinion, there are certain words that determine if that statement is fact or opinion. If these words are strong words, such as "should" or "seems" then it is opinion. Humans are immersed in infinite quantities of information. This information is categorized by humans into knowledge, propaganda, and opinion. All economic, political and social powers can create their claim by uses of knowledge, propaganda, or opinion and these claims attract the masses. There are several criteria in someone can differentiate between knowledge, opinions and propaganda. ...read more.