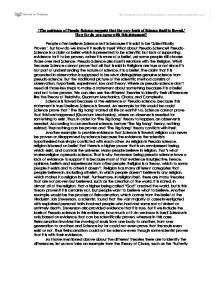 'The existence of Pseudo-Science suggests that the very basis of Science itself is flawed.' How far do you agree with this statement? People often believe Science as it is because it is said to be 'Scientifically Proven'. But how do we know if it really is true? What about Pseudo-Science? Pseudo-Science is a claim or belief which is presented to be scientific but lack of supporting evidence for it to be proven, rather it is more of a belief, yet some people still choose those over real Science. Pseudo-Science also has its relations with the Religion. Why? Because Science cannot prove that all that is said in Religions are true or not since it's not part of understanding the nature of science, it is a belief. The claim that it is grounded in observation is supposed to be what distinguishes genuine science from pseudo-science. But the traditional picture of the scientific method consists of observation, hypothesis, experiment, law and theory. Where as pseudo-science don't need all those key steps to make a statement about something because it is a belief and not to be proven. ...read more.

Another example would be the process of Reincarnation, which comes from the belief of the Hinduism. Ian Stevenson, a scientist, found that the vast majority of cases investigated with explained personal traits involved people who had met some sort of violent or untimely death. Stevenson also provided evidence that it is true. But if we include the basis of Pseudo-science in this evidence, how much of it do we know is true? Science is only based on evidence that can be scientifically proven, whereas in this case Reincarnation involves the moving of souls from one body to another, from one generation to another; and Science by far could not even prove that the souls even exist or not. Thus Reincarnation could not be science even though some scientist proves that it is with their evidence. As I have mentioned above about the different theories there are to identify the differences, let us now take an example from the Theory of Chaos, such as the 'Butterfly Effect', which basically shows that from such a tiny mistake occurring can cause a huge problem not only for one person but for many others around them as well; chaos also imply that there is no order. ...read more.

Even if it were to work or not, no scientist can prove whether crystals has its own power within it to help cure pains on parts of the human body. Just like the use of Acupuncture, but in different ways. It also used to generate a field of positive crystalline energy depending on which crystals gives out which type of energy fields. This kind of magic pendant although it cannot be proven has been believed and stated that it is scientific due to its unexplained capability. As I have mentioned above, science needs its key steps to prove whether or not the relevant data scientists collected can be concluded to develop a theory and unifies various laws in terms of some underlying principal. But we don't surely know whether the new discovered scientific laws are correct or not, now do we? If we connect it with pseudo-science, people's belief and real science collide with each other in various ways. But pseudo-science helps and motivates scientists to find out more about how it works. Through many of the examples I have described above, have made some points from my own perspective that science itself is flawed due to the existence of pseudo-science, but whether it is completely true we don't know, and that it is, and will forever be incomplete. ...read more.