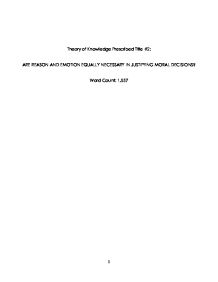 Theory of Knowledge Prescribed Title #2: ARE REASON AND EMOTION EQUALLY NECESSARY IN JUSTIFYING MORAL DECISIONS? Word Count: 1,557 Moral decisions are presented to us every single day and we are challenged to choose between what our heart tells us is right and what reason is beckoning us to do. Generally, it is reason that makes the better judgment because it has been more thoroughly thought over. But although reason might make the better judgment, it does not mean that it is used more often nor is it a necessary component of moral decision-making. Emotion, on the other hand seems to be the way of knowing that compels us to make hot-headed decisions; meaning that emotion overwhelms us when making spur of the moment decisions that at first do not seem to have any consequences. Nevertheless, which one is the one begging and screaming to be exercised when we are faced with a moral decision? Is it reason or emotion or both? Reason and emotion both play a considerable role in justifying moral decisions in prosaic controversies, but emotion in more situations than others tilts the balance of moral decisions. ...read more.

The use of reason and emotion relies upon that factor. Emotion usually responds faster than reason when a decision is to be made without previous consideration. Imagine a young man who did not reach to his capacity during the years of his education. His lack of knowledge and education resulted in his present financial insecurity and perhaps even future bankruptcy. Through all his unfortunate issues, he manages to meet a wonderful girl who blindly falls in love with him because of his charming bravado and dazzling good looks. Further down the road, he begins planning his proposal to her, and he goes through the huge process of finding the right ring, seeking the girl's parents' permission, but most importantly, asking her at the right time in an exceptionally romantic atmosphere. He is attempting to use emotion to overwhelm any reason that might disqualify him as the one. In most cases, emotion will cause the girl to accept his proposal because it can be overpowering when set in the right mood. But later on, when the initial excitement has died down, it is highly plausible that the girl will use reason to decipher what she had really gotten herself into. ...read more.

Four out of the five male friends I asked about whether reason and emotion are equally necessary in justifying moral decisions answered without missing a beat that reason was more potent in handling decisions. They later admitted that they thought that using emotion as a primary way of justifying moral decisions seemed too "girly". This created yet another bias since every single female I asked decided that emotion is more exercised more prominently when they make decisions. Peers, friends, and family members can strongly influence what and how we think without our awareness. Emotion is inevitable. It is from deep within. Reason is an attempt at logical reasoning behind every action. Emotion cannot be put into words or described. Much like love, joy, and fear; we cannot describe these "feelings" in such a way that others can feel it too. They have to experience it for themselves. When justifying moral decisions, emotion inevitably tilts the balance whether it is desired or not. Although it is important to acknowledge our emotion, good moral decision making involves more than just acting on our intuitions. It is possible to make a moral decision with only emotion involved so that they are not both equally necessary, but reason should be thoughtfully considered with much reasoning and perhaps less emotion. ...read more.