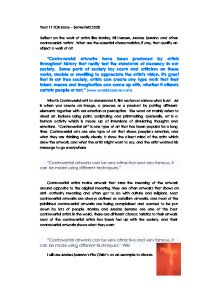 Reflect on the work of artists like Banksy, Bil Hensen, Andres Serrano and other controversial artists(TM). What are the essential characteristics, if any, that qualify an object a work of art

Year 11 TOK Essay - Semester2,2008 Reflect on the work of artists like Banksy, Bil Hensen, Andres Serrano and other controversial 'artists'. What are the essential characteristics, if any, that qualify an object a work of art. "Controversial artworks have been produced by artists throughout history that really test the standards of decency in our society. Some parts of society lay scorn and criticism on these works, unable or unwilling to appreciate the artist's vision. It's great that in our free society, artists can create any type work that their talent, means and imagination can come up with, whether it offends certain people or not." (www.your3dsources.com) What is Controvesial art? To understand it, first we have to know what is Art. Art is when you create an image, a process or a product by putting different elements together with our emotion or perception. The word art mainly refers to visual art, include using paint, sculpturing and printmaking. Generally, art is a human activity which is made up of intensions of simulating thoughts and emotions. ...read more.

"Controvertial artworks can be very attractive and very famous, it can be made using different techniques." Wiki I will use Andres Serrano's Piss Christ's as an example to discuss. It is a photograph taken by the artist of a small plastic crucifix with jesus on it, and jesus and the crucifix is in a glass full of the artist's urine. There is a rumour saying that the glass also contains the artist's blood. This artwork became the winner of the Southeastern Center for Contemporary Art's "Awards in the Visual Arts" competition. This artwork show the ideas of freedom of speech. Why is this artwork controversial? Jesus is god, he represents holy,loyalty, faith, trust, but he was put on a cross, he was suffering, but it was because of the people who has a big power which made him been put on a cross because he said things that some people disagrees, and in these days, people who has power are the ones who controls us. In this picture, the power people represents the Governments, politicians, Bosses, etc, all the people who controls us. ...read more.

It is very unethical for artists to make artwork that offend other people, especially works that insults the culture. The intension of making it is just to express themselves, but the consequence of expressing themselves ends up being hated by certain people or culture. The origin of beauty of controversial artwork is the original meaning of the work, the meaning that shows anti- authority. The better the artwork gives a message (nomatter if it is offended to people or not) to the people in soviety, that is called a good piece of art. I chose this topic is mainly because I am an art student, and art is one of my favourite subject. My theme in art is Street art, street art are for artists to communicate to the big society through artworks which has been made on different surfaces around the street, and in street art, controvertial art is a very important technique in it. My personal opinion is that controversial artworks that offends people are still artwork, and is a type of art, I think that it is acceptable to have work like this sometimes, and for the people who feel offended, BAD LUCK, such as life, because we have the freedom of speech. ...read more.