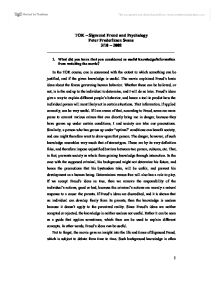 TOK - Sigmund Freud and Psychology Peter Frederiksen Svane 3/10 - 2008 ___________________________________________________________ 1. What did you learn that you considered as useful knowledge/information from watching the movie? In the TOK course, one is concerned with the extent to which something can be justified, and if the given knowledge is useful. The movie explained Freud's basic ideas about the forces governing human behavior. Whether these can be believed, or not, is in the end up to the individual to determine, and I will do so later. Freud's ideas give a way to explain different people's behavior, and hence a tool to predict how the individual person will most likely act in certain situations. That information, if applied correctly, can be very useful. If I am aware of that, according to Freud, some are more prone to commit various crimes that can directly bring me in danger, because they have grown up under certain conditions, I and society can take our precautions. Similarly, a person who has grown up under "optimal" conditions can benefit society, and one might therefore want to draw upon that person. The danger, however, of such knowledge resembles very much that of stereotypes. Those are by its very definition false, and therefore impose unjustified barriers between two person, cultures, etc. That, in fact, prevents society as whole from gaining knowledge through interaction. In the case with the supposed criminal, his background might not determine his future, and hence the precautions that his bystanders take, will be unfair, and prevent his development as a human being. ...read more.

Whether those messages are true or not is another case. Sometimes they do tell a valid thing, but other times they do not. Sometimes one can have a very strong intuition about something that in the end can be wrong. And the fact that intuition can be trained, educated and improved indicate that they are not fallible. Therefore one should be cautious about following one's intuitions blindly, since it does not guarantee the truth. Rather one should let it guide one, and have it double checked with other ways of knowing. 3. According to the film, why is Sigmund Freud given the title Father of Psychology? Does he deserve to be remembered as one of the most influential thinkers of the 20th century? Why or why not? For a person like myself, who doesn't know a lot about psychology, the only ideas that I can mention from that field, I have realized, were developed by Freud. For me, that justifies his claimed position as the father of Psychology. A father is one who brings up his son or daughter, teaches them the important lessons of life, etc. Similarly, Freud lay out the groundwork for his field, and came up with the guidelines that his "child" should follow. It is not only his ideas that justifies such a position, but also the approach that he used to support his ideas. Using a more "scientific" method to establish his ideas, and appealing to intuition, he gave way to clinical psychology. The applications of psychology toady, it appears, are widespread, and in much use, for example, to analyze criminal minds, thus preventing them from committing new crimes. ...read more.

5. Why are human sciences considered "soft" subjects while natural sciences are considered "hard" subjects? The use of the words "hard" and "soft" in regard to the various sciences implies that a hierarchy exists. Whether this is justified or not is another case. The parameters that are used to place the sciences in the hierarchy, with the soft being below the hard, have their roots in how reliable and useful the knowledge is. Reliability, as was discussed earlier, depends on how well each of the steps in the scientific method can be carried out and to a satisfactory extent. The difference between the two are marked by differences in objectivity contra subjectivity. While the hard sciences typically entertains itself with the nature of external things, such as motion, structures, reactions, etc. that are somewhat perceivable, and therefore disassociated from intuition, soft sciences' focus are directed inwards at things that cannot at this point be perceived inherently. It is possible to observe "hard" objects, such as chemical reactions, but not "soft" objects, such as "the invisible hand" in economics. Some might say that it is not possible to observe such things as atoms within the "hard" spectrum, but while deductive reasoning and indirect measurements provide support for that theory, soft sciences find it harder to use deductive reasoning and often lack tools to measure a certain "force." The difference between the hard and soft sciences can be summed up using key words, such as reliability, ability to be perceived or measured, to what extent the scientific method can be applied, etc. One day, perhaps it will might be possible to quantify thoughts using MRI or something similar. In that case, psychology might become a little bit harder. ?? ?? ?? ?? 1 ...read more.