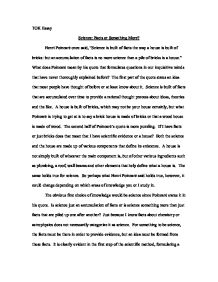 TOK Essay Science: Facts or Something More? Henri Poincar� once said, "Science is built of facts the way a house is built of bricks: but an accumulation of facts is no more science than a pile of bricks is a house." What does Poincar� mean by his quote that formulates questions in our inquisitive minds that have never thoroughly explained before? The first part of the quote states an idea that most people have thought of before or at least know about it. Science is built of facts that are accumulated over time to provide a rational thought process about ideas, theories and the like. A house is built of bricks, which may not be your house certainly, but what Poincar� is trying to get at is to say a brick house is made of bricks or that a wood house is made of wood. The second half of Poincar�'s quote is more puzzling. If I have facts or just bricks does that mean that I have scientific evidence or a house? Both the science and the house are made up of various components that define its existence. A house is not simply built of whatever the main component is, but of other various ingredients such as plumbing, a roof, wall beams and other elements that help define what a house is. ...read more.

If I were to state that the atom Hydrogen has one proton and electron and is a diatomic atom, that does not necessarily mean it is chemistry. If I were to say that Hydrogen in Hydrochloric acid is necessary because the Hydrogen ion atom is needed to make it a strong acid then I could say it is chemistry. Both are facts, but the latter provides why it is part of chemistry by explaining what the fact is and does. Some say that science is an accumulation of facts though because they believe that is what science is about. When people think of science they think of facts such as "The world is 4.5 billion years old" or "Dark energy is most of the mass of the universe." Science to these people are facts and nothing more. They argue that if you make a discovery in science you introduced a new fact and thus facts are science. Both sides of the argument provide compelling information for the side they represent; however, I believe that science is not an accumulation of facts. Does what Poincar� said about science not being an accumulation of facts apply to other areas of knowledge as well? I believe it does and for example, math is not just an accumulation of numbers or formulas. ...read more.

It can be many things and from the online dictionary it gives us the definition, "the limit of the ratio of the increment of a function to the increment of a variable in it, as the latter tends to 0; the instantaneous change of one quantity with respect to another, as velocity, which is the instantaneous change of distance with respect to time." I had to know all of this to understand the derivative and be able to solve for it in its various forms such as the derivative of a trig function. The formulas like the definition of a derivative, power rule, quotient rule, and all the other derivative rule help me make the connection between the relationship a function has. It seems that science is just not an accumulation of facts and that any other area of knowledge is just not an accumulation of the basic concepts that make it so unique like mathematics. Some people may disagree with me, some may agree and some may not have an opinion at all. It can be said though that anything is not just the brief concepts that make that specific anything what it really is but the in depth connection that is made from all the concepts that correlate with each other. Reference "Derivative." Dictionary. 26 Jan 2009 <http://dictionary.reference.com/browse/Derivative>. ...read more.