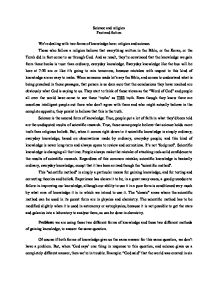 Science and Religion; Fact or Fiction

Science and religion Fact and fiction We're dealing with two forms of knowledge here: religion and science. Those who follow a religion believe that everything written in the Bible, or the Koran, or the Torah did in fact come to us through God. And as result, they're convinced that the knowledge we gain from these books is truer than ordinary, everyday knowledge. Everyday knowledge like the bus will be here at 7:30 am or like it's going to rain tomorrow, because mistakes with respect to this kind of knowledge are so easy to make. When someone reads let's say the Bible, and comes to understand what is being preached in those passages, that person is so darn sure that the conclusions they have reached are obviously what God is saying to us. They start to think of these views as the "Word of God" and people all over the world have come to see these 'truths' as THE truth. Even though they know there are countless intelligent people out there who don't agree with them and who might actually believe in the complete opposite, they persist in believe that this is the truth. ...read more.

Scientists, however, are able to prove that life existed more than millions of years ago through rocks and fossils. (You can't fake a rock or fossil!) What ends up happening is that our knowledge becomes divided. Some will believe only once source of knowledge with respect to a certain question, and completely ignore whatever input the other source offers. We kind of shove away certain areas of science because we can't comprehend the complexity of it and we don't know where it fits in our own personal picture of the world. We thus, restrict ourselves to only a small part of knowledge because we just can't get our minds to wrap around those ideas and accept them. Some people have chosen to believe what they think "God is saying", despite the results of what hard-working scientists have uncovered for decades. Others, unfortunately, have attacked religion, which is a huge pillar in society, belittling its preaching and knowledge of God, deeming it as speculative. A fact is just a concept, a term that we place on scientific experiments that produce the same results over and over again given the same conditions. At least, I think so. ...read more.

But something can be not true for one person, and yet be true for a whole bunch of other people. Does that then make it true because majority feels it is? I don't think so. Just because a whole bunch of people feel it's true and agree it's true doesn't make it true. Majority isn't always right. It's like when everyone believed that the earth was the center of the universe. And then a few people, notable Galileo, came along and said it wasn't so. Well, you know what, Galileo was right. I guess fiction is up for personal interpretation. If you want to believe it isn't true, go ahead. If you want to believe it's true, good for you. I don't really feel the issue is whether what we say is fiction really is fiction. I think the real problem is why do we feel compelled to define what is fiction and what is non-fiction for the whole of society. People interpret things differently because people are different. You try to underline something this controversial as one thing for an entire society, a society made up of individual beings with individual opinions and reasoning, and you break it apart. So, should we just let it go and not talk about it because everyone's going to see it differently? I can't make that decision as one person either. ...read more.