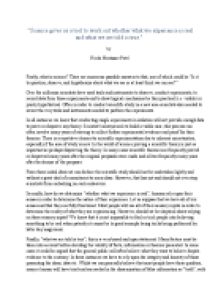 Science gives us a tool to work out whether what we experience is real and what we are told is true.

﻿"Science gives us a tool to work out whether what we experience is real and what we are told is true." by Nicola Montague-Patel Firstly, what is science? There are numerous possible answers to that, one of which could be ?Is it to question, observe, and hypothesize about what we see or at least think we can see?? Over the millennia scientists have used tools and instruments to observe, conduct experiments, to record data from those experiments and to draw logical conclusions be they practical (i.e. visible) or purely hypothetical. Often in order to conduct scientific study in a new area scientists also needed to invent the very tools and instruments needed to perform the experiments. In all instances we know that conducting single experiments in isolation will not provide enough data to prove or disprove any theory. Scientist?s always seek to build a viable case; this process can often involve many years of striving to collect further experimental evidence and proof for their theories. There is a repetitive element to scientific experimentation due to inherent uncertainties, especially if the area of study is new. In the world of science proving a scientific theory is just as important as perhaps disproving the theory. In many cases scientific theories are frequently proved or disproved many years after the original proposals were made and all too frequently many years after the demise of the proposer. ...read more.

Plato with his ideas that every object is working towards the perfect mathematical form (perhaps he had conceived an early draft of the Grand Unified Theory?) Jumping forwards to the current millennium, in the world of high-energy particle physics, as recently as this year (2013) scientists have used vast man made devices to all but prove the existence of one of the fundamental building blocks of the universe. A particular type particle first envisaged by Professor Peter Higgs (amongst others) back in the previous century has needed 50 plus years of slow methodical observation and invention of larger and larger particle accelerators culminating in the building at huge expense of the large Hadron Collider at Cern in Switzerland, along with huge instruments to detect the smallest traces of proof that the Higgs boson actually existed for a few milliseconds before decaying almost as rapidly it was created. In this instance an enormous amount of effort and money has been expended throughout the scientific community over the last 50 years in the search for this elusive particle; it should be noted that the search could easily have ended with the conclusion that the particle did not exist or possibly that we did not have the means to detect it. In either case the scientists involved in the search had enough belief in the theory to pursue the cause relentlessly for many decades. ...read more.

Many a dictatorship of a secular state has used the some basic principles of restricting information and freedom of thought to control the populous for their benefit. As a counterpoint to the long held version of the ?truth?, science is readily providing convincing evidence to the contrary; almost always by the basic principles of ?questioning, observing, and hypothesizing about what we see or at least think we can see?. Certain groups and individuals are defending their beliefs using the notion of ?intelligent design? the idea that this universe that we know cannot have come about randomly in amongst many others and therefore we must be part of a bigger picture in which control is being exorcised by someone or something with a purpose, although obviously we don?t know what that purpose is of course. The openly anti-religious attitudes and ideas of prominent thinkers of our generation such as Professor Richard Dawkins should be leading the majority of the world?s independent people to the conclusion that ?no? we can?t tell the difference between the real and the unreal or that we should always believe what we are told. We must therefore have the right to question everything and we have the freedom of thought that has allowed us come to our own conclusions, be they right or wrong; that surely is the object of science and the tool that it has provided to us. ...read more.