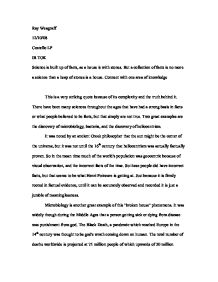 Science is built up of facts, as a house is with stones. But a collection of facts is no more a science than a heap of stones is a house. Connect with one area of knowledge

Ray Weagraff 12/10/08 Costello LP IB TOK Science is built up of facts, as a house is with stones. But a collection of facts is no more a science than a heap of stones is a house. Connect with one area of knowledge This is a very striking quote because of its complexity and the truth behind it. There have been many sciences throughout the ages that have had a strong basis in facts or what people believed to be facts, but that simply are not true. Two great examples are the discovery of microbiology, bacteria, and the discovery of heliocentrism. It was noted by an ancient Greek philosopher that the sun might be the center of the universe, but it was not until the 16th century that heliocentrism was actually factually proven. So in the mean time much of the world's population was geocentric because of visual observation, and the incorrect facts of the time. So these people did have incorrect facts, but that seems to be what Henri Poincare is getting at. Just because it is firmly rooted in factual evidence, until it can be accurately observed and recorded it is just a jumble of meaninglessness. ...read more.

The war is not a primary cause but can certainly attribute to the fiscal crises that we face today. History has not only been mistaken, but has been an outright lie multiple times. One such example would be the way children are taught in school about Christopher Columbus. Undoubtedly one of the most influential men in history was not as we have heard a great man but rather a terrorist with inhumane ways of dealing with the indigenous Americans. A man who never discovered the earth was round. That discovery had been made roughly 2,000 years previous by another man name Pythagoras. Another lie is the idea that Europe has invented all of the mathematical formulas of our world. Historians continue to discover that more often then not mathematical advances have almost always appeared faster in the Middle East then they have in Europe "In mathematics, Pascal's triangle is a geometric arrangement of the binomial coefficients in a triangle. It is named after Blaise Pascal in much of the western world, although other mathematicians studied it centuries before him in India, Persia, China, and Italy". ...read more.

We are told that this is a time when child labor laws are beginning to crop up. We are not told of the vast magnitude of the problem. We can not even imagine the enormity of the situation that the American people where dealing with at the time. Yet the industrial revolution is seen as a very positive time for everyone in the United States due to our advancement in technology according to the more moderate and traditionalist point of view. So just as in science a vast accumulation of facts really proves nothing. Just because you have thirty ways in science to prove something right does not always make it so. It might be right under those thirty different circumstances but it only takes one way to prove it wrong to make it an incorrect theory. So in history you can see it is not just an assortment of facts that make it strong or believable. It is an assortment of facts that are from many different varied sources often from different sides of the line that make it a coherent and accurate description of what happened. In other words you might say that you don't just build a house with studs, but also with nails, shingles, and pipes. ...read more.