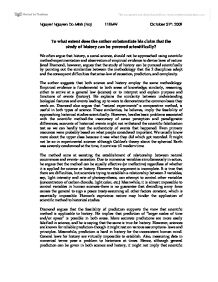 To what extent does the author substantiate his claim that the study of history can be pursued scientifically? We often argue that history, a social science, should not be approached using scientific method-experimentation and observation of empirical evidence to devise laws of nature. Jared Diamond, however, argues that the study of history can be pursued scientifically by pointing out the similarities between the methodology that the 2 disciplines adopt and the consequent difficulties that arise-law of causation, prediction, and complexity. The author suggests that both science and history employ the same methodology. Empirical evidence is fundamental to both areas of knowledge; similarly, reasoning, either to arrive at a general law (science) or to interpret and explain purpose and functions of events (history). He explains the similarity between understanding biological features and events leading up to wars to demonstrate the common basis they work on. ...read more.

Due to numerous variables simultaneously in action, he argues that the method can be equally effective (or ineffective) regardless of whether it is applied for science or history. However this argument is incomplete. It is true that there are difficulties, but scientists trying to establish a relationship between 2 variables, say, light intensity and rate of photosynthesis, can attempt to control other variables (concentration of carbon dioxide, light color, etc.) Meanwhile, it is almost impossible to control variables in human sciences-there is no guarantee that dwindling army force causes the general to sign a peace treaty-assuming all other factors constant, which is essentially impossible. Human's capricious nature may hinder the application of scientific method to historical studies. Diamond argues that the feasibility of prediction supports the view that scientific method is applicable to history. ...read more.

However, the variability of human mind and subjectivity of some historical concepts increase the complication: the scientific method is insufficient. It does not take into account the fact that the hypothesis can be corroborated or falsified depending on the human being involved, and also sometimes there is no clear boundary between "right" or "wrong". This diminishes the effectiveness of scientific method which works on revision of obsolete concepts and derivation of new ones. Although Diamond has, to a certain extent, discuss the link between scientific and historical method, it is not convincing enough that historical study can be scientifically pursued. Despite being a part of the historical method due to certain common elements, scientific method is not complete and complex enough to fully achieve the goal of history. Word count: 689 ?? ?? ?? ?? Nguyet Nguyen Do Minh (Na) 11EMW October 31th, 2009 ...read more.