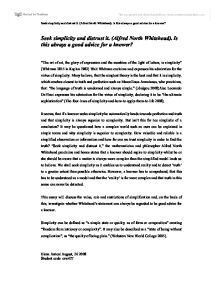 Seek simplicity and distrust it. (Alfred North Whitehead). Is this always a good advice for a knower?

Seek simplicity and distrust it. (Alfred North Whitehead). Is this always a good advice for a knower? "The art of art, the glory of expression and the sunshine of the light of letters, is simplicity" (Whitman 1855 in Kaplan 1982) Walt Whitman exclaims and expresses his admiration for the virtue of simplicity. Many believe, that the simplest theory is the best and that it is simplicity, which reaches closest to truth and perfection such as Marcellinus Ammianus, who proclaims, that: "the language of truth is unadorned and always simple." (J�z�gou 2008)Also Leonardo DaVinci expresses his admiration for the virtue of simplicity, declaring it to be "the ultimate sophistication" (The-four-laws-of-simplicity-and-how-to-apply-them-to-life 2008). It seems, that if a knower seeks simplicity he automatically heads towards perfection and truth and that simplicity is always superior to complexity. But isn't this far too simplistic of a conclusion? It may be questioned how a complex world such as ours can be explained in simple terms and why simplicity is superior to complexity. How valuable and reliable is a simplified observation or information and how far can we trust simplicity in order to find the truth? "Seek simplicity and distrust it," the mathematician and philosopher Alfred North Whitehead proclaims and hence states that a knower should aspire to simplicity whilst he or she should be aware that a matter is always more complex than the simplified model leads us to believe. ...read more.

To reach simplicity, humans find patterns within the complex and create models that generalise their specific information. The complex information accumulated beforehand is important to create this theory and to back-up one's hypothesis. In the natural sciences, perception and reason are used to develop theories in order to explain observations or theoretical assumptions. These theories are often, on the surface, astonishingly simple, such as Einstein's Theory of relativity. That the simple is often preferred to the complex can be illustrated with the example of Occham's razor: The principle states that entities should not be multiplied beyond necessity and recommends to select "the theory that introduces the fewest assumptions and postulates the fewest entities." (Occham's razor 2008). It is therefore assumed, that "All other things being equal, the simplest solution is the best." (understanding-occams-razor 2008) An example of the application of this theory is the rejection by scientists of the hypothesis of a luminiferous ether in response to Albert Einstein's Special Theory of Relativity (Britannica Concise Encyclopedia: 2007) as this was less complicated and Newton's remark that "Nature is pleased with simplicity, and affects not the pomp of superfluous causes" (Simplicity, 2008) may help us to understand why human nature tends to seek for simplicity. When nature follows a simple logic then reason should guide us to find this logic and these patterns. The natural sciences aim to use reason and perception to find these patterns and to express them in a simple theory utilizing precise language. ...read more.

A knower should be aware, that we are never able to understand the whole complexity of a process or information, that everything is, in some form, simplified. Take natural phenomena in science for example: When we observe something we rely on our sense perception, which is rather narrow. The brain processes the information received through our senses and simplifies and ultimately interprets and alters that information. The "objective" observation we think we have made is therefore a rather limited and altered version of reality. Unconsciously we have already simplified information and therefore changed information before we are aware of it. As a result, it is not only the information that we consciously alter and simplify, we should also distrust the information upon which we base our assumptions. It can therefore be concluded, that Whitehead's advice is important for a knower as simplicity is vital to understand and evaluate information. A knower should ask him- or herself to what extent information can and should be simplified in order to comprehend it without altering its meaning or trivializing it. Accuracy should not be sacrificed in favour of triviality or as Einstein put it "Everything should be as simple as possible, but no simpler" (QuotationLibrary 2004). A knower may therefore seek simplicity in order to find gain a better understanding, find patterns or to draw conclusions but should always be aware that there is more complexity to a topic than it seems. ...read more.