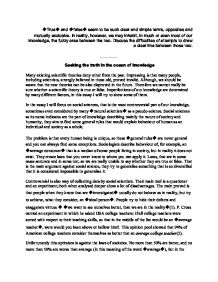 Seeking the truth in the ocean of knowledge

?True? and ?false? seem to be such clear and simple terms, opposites and mutually exclusive. In reality, however, we may inhabit, in much or even most of our knowledge, the fuzzy area between the two. Discuss the difficulties of attempts to draw a clear line between those two. Seeking the truth in the ocean of knowledge Many existing scientific theories deny other from the past. Impressing is that many people, including scientists, strongly believed in those old, proved invalid. Although, we should be aware that the new theories can be also disproved in the future. Therefore we cannot really be sure whether a scientific theory is true or false. Imperfections of our knowledge are determined by many different factors, in this essay I will try to show some of them. In the essay I will focus on social sciences, that is the most controversial part of our knowledge, sometimes even considered by many ?natural scientists? as a pseudo-science. Social sciences as its name indicates are the part of knowledge describing mainly the nature of society and humanity, they aim to find some general rules that would explain behaviour of human as an individual and society as a whole. ...read more.

if the uncertainty of measurement is so big. In this case error could be easily calculated, although in most of cases we have no opportunity to verify obtained results, that is a strong reason why we should be more sceptical when analysing any statistical data. The next problem that sociologists face is that they can never ask questions everyone in the population, but they every time have to assemble a representative test group. The question how to choose people to this group, what criteria should they fulfil, is still open. Every time an experiment is made, it is done on a test group, although scientists usually generalise the results on the whole population. Anyway what is ?true? for the test group, is not certainly ?true? for the rest of society. The modern trend in social sciences is to present results in numbers ? to quantify them ? because numbers are considered more trustful, and data presented in charts look clearer. Numbers have that advantage over language that are not ambiguous ? ?two? means always ?two? and never ?three?. Unfortunately when we give assign a meaning to numbers they starts to be no less ambiguous than a language. ...read more.

Sometimes contradictory theories exist even simultaneously, just like those two concerning our psyche. The first, modern says: ?psyche is determined mainly by genes?, and Freud?s ? older but still in use says: ?psyche is determined by a childhood?. There are lots of arguments pro, and against both - they can exist together because the truth is somewhere in between, although we do not know where. More spectacular are paradigm shifts in natural sciences. They alike prove imperfections of our knowledge but in non-social fields. I can give at least two up-to-date examples of paradigm shifts in natural sciences. First the recently disproved physical principle that an electron is the lowest electric charge freely existing in the universe, and second the discovery proving that neurones similarly to other cells can reproduce themselves in the adult age. Many physicians and biologists still can?t believe that they were in so deep mistake. Otto Neurath?s compares knowledge to a ship, and scientists to sailors that continuously repair it by replacing old used up planks(4). Most of planks decay with time ? people become aware that they were in mistake ? that they confused truth with false. Drawing further conclusions, we can say that we confuse truth with false all the time, being not aware of it. Well, it is not a revolutionary statement ? Aristoteles already said ?To err is human?(5). Number of words: 1231 ...read more.