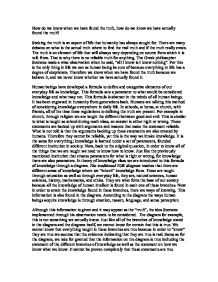 How do we know when we have found the truth, how do we know we have actually found the truth? Seeking the truth is an aspect of life that humanity has always sought for. There are many debates on what is the actual truth where to find the real truth and if the truth really exists. The truth is an element of life that will always vary depending on source from which it is told from. That is why there is no reliable truth for anything. The Greek philosopher Socrates made a wise observation when he said, "all I know is I know nothing". For this is the only thing in life we can as human being be sure of because everything in life has a degree of skepticism. Therefore we know when we have found the truth because we believe it, and we never know whether we have actually found it. Human beings have developed a formula to define and categorize elements of our everyday life as knowledge. This formula sets a parameter to what would be considered knowledge and what may not. ...read more.

This information is also found in the diagram. According to the diagram the ways human beings acquire knowledge is through emotion, reason, language, and sense perception. Although this information is given and it may appear as the "truth", the idea Socrates implemented through his observation needs to be considered. The diagram for example, this is not something we actually know. Just like all of the branches of knowledge stated in the diagram and the diagram itself, we cannot know for certain that this is true. We cannot know that everything taught in these branches are true because in order to "know" they are true we assume that the evidence indicating that they are true is real. Same as for the diagram, we take for granted that the information on the diagram is true including the statement of the different branches of knowledge as well as the statement on how we know what we know. It cannot be proven completely that these statements are true because they are based on information human beings have come up with so in order to believe the argumentation behind why the diagram is true we would have trust the person who made the arguments. ...read more.

This agreement forms the first set of regulations and creates the idea of right and wrong. Once the agreement is formed it may be used as a tool to impose order in society. That is why human beings created the term knowledge, to ultimately impose order. Although this example may seem farfetched it explains what occurs in our society. Rules are established in all nations in all communities. All of the rules established are based on knowledge. But knowledge is never completely reliable yet few take the time to question this reliability. This means that all of humanity and its bases have been established on the principle of trust. It is believed that there are areas of knowledge, and it is believed that this is known through a set of ways that are believed to be true. But none of this is certain therefore it cannot be known when truth is found and if it is for certain. Truth is a word created by humans in the first place to set a sense of credibility to the base of all their thought, so that development could occur. "Truth" implicates a reliable base from which to build upon because humans are incapable of dealing with a degree of doubt in their principles. ...read more.