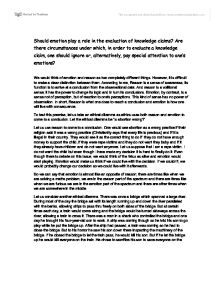 Should emotion play a role in the evaluation of knowledge claims?

Should emotion play a role in the evaluation of knowledge claims? Are there circumstances under which, in order to evaluate a knowledge claim, one should ignore or, alternatively, pay special attention to one's emotions? We would think of emotion and reason as two completely different things. However, it is difficult to make a clear distinction between them. According to me, Reason is a sense of awareness; its function is to arrive at a conclusion from the observational data. And reason is a volitional sense; it has the power to change its logic and in turn its conclusions. Emotion, by contrast, is a sense not of perception, but of reaction to one's perceptions. This kind of sense has no power of observation. In short, Reason is what one does to reach a conclusion and emotion is how one will live with consequence. To test this premise, let us take an ethical dilemma as ethics uses both reason and emotion to come to a conclusion. Let the ethical dilemma be 'Is abortion wrong?' Let us use reason to come to a conclusion. ...read more.

A ship was coming though so he told his son to go play while he put the bridge up. After the ship had passed, a train was coming so he had to close the bridge. But to his horror he saw his son down there inspecting the machinery of the bridge. If he closed the bridge to let the train pass, he would kill his son. But if he let the bridge up he would kill everyone on the train. He chose to sacrifice his son to save everyone on the train. Nobody on that train knew that their life was in danger and what the bridge keeper had to do. It is very rare that someone uses reasoning over emotion to come to a conclusion in an ethical situation. The bridge keeper used reasoning to see which the correct thing to do was; whether to sacrifice his four-year-old son or to sacrifice approximately 200 people in the train. He came to the conclusion that sacrificing his son for all the people on the train for the lesser of the two devils. ...read more.

Isn't that how God or religion was created. We wanted a reason the universe was created and so our emotion created God. And emotion in ethical issues shows us the right path - emotion (sympathy, anger, sadness) will show the answer we want which we hope to be correct. Here is my last dilemma: A company who sells drugs has made a new drug. They know that there are some side effects which will affect some kinds of people very badly. Is it right to put it on the market knowingly to make money and to harm x amount of people? We would think it is wrong so that is what our emotion tells us to. So our emotion, a way of knowing, can be connected to our gut feeling, or if we think about this psychologically, ESP. So therefore I think emotion should play a role in the evaluation of knowledge claims. It should because if we cannot live with the conclusion it is usually something bad. Just like in the case of the bridge keeper, if individuals do not use emotion it is their choice. But it still should play a role in the evaluation of knowledge claims. ...read more.