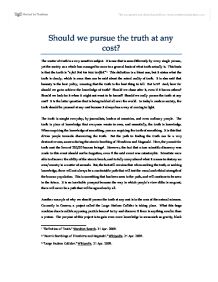 Should we pursue the Truth at any cost?

Should we pursue the truth at any cost? The matter of truth is a very sensitive subject. It is one that is seen differently by every single person, yet the society as a whole has managed to come to a general basis of what truth actually is. This basis is that the truth is "a fact that has been verified."1 This definition is a blunt one, but it states what the truth is clearly, which is more than can be said about the actual reality of truth. It is also said that honesty is the best policy, meaning that the truth is the best thing to tell. But is it? And, how far should we go to achieve the knowledge of truth? Should we chase after it, even if it harms others? Should we look for it when it might not want to be found? Should we really pursue the truth at any cost? It is the latter question that is being tackled all over the world. In today's modern society, the truth should be pursued at any cost because it always has a way of coming to light. The truth is sought everyday; by journalists, leaders of countries, and even ordinary people. ...read more.

But if we do not perform this experiment, the human population is missing out on the chance to see what we are really made of, and how the universe became what it is today. It can also allow us to map the future of the universe, and work out how we, as in life, can exist in such conditions. If we did not pursue this, we would be denying the society knowledge and therefore the truth that could potentially allow us to exist on other planets. However, this view only represents a proportion of society and is then another example of how the truth can differentiate between people, and how this can cause such problems when pursuing the truth. A third reason why we should pursue the truth at any cost is that it uncovers mistakes made by people. An example that has recently came to light is the apparent tortures that took place at Guantanamo Bay owned by the United States, a country which is against such a thing. Guantanamo Bay is a detention facility for high-risk criminals such as terrorists. By having people fully research and try to find out what was really happening to these criminals, the people of America were able to stop such acts which are inhumane. ...read more.

The truth allows us to discover what we can do with society and the world, how we can change society, protect civilization. It also allows the human population to prevent terrible things from happening to individuals, for example the prisoners in Guantanamo Bay. Also, by gaining truth we are gaining further and further access into the unknown and piece by piece being able to decipher not only where we live in, but what we live in. But sometimes the path to discovering truth is not always the most morally-safe one. Sometimes, the path taken is a dangerous and costs more than just a few thousand dollars, it can cost lives too. This is when it can get hard to understand why we must pursue the truth at any cost, as it is when the truth can become dangerous too. Then, there is also the possibility that religion could be another form of the truth, which adds in even more controversy than before. Finally, the truth is something that every human being has the right to knowing, and nothing should stand in the way of that. WORD COUNT : 1,243 1 "Definition of Truth." WordNet Search. 21 Apr. 2009. 2 "Atomic Bombings of Hiroshima and Nagasaki." Wikipedia. 21 Apr. 2009. 3 "Large Hadron Collider." Wikipedia. 21 Apr. 2009. ?? ?? ?? ?? ...read more.