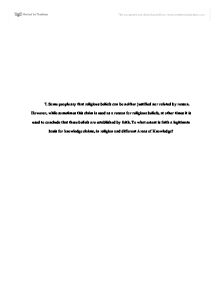 Some people say that religious beliefs can be neither justified nor refuted by reason. However, while sometimes this claim is used as a reason for religious beliefs, at other times it is used to conclude that these beliefs are established by faith. To wha

7. Some people say that religious beliefs can be neither justified nor refuted by reason. However, while sometimes this claim is used as a reason for religious beliefs, at other times it is used to conclude that these beliefs are established by faith. To what extent is faith a legitimate basis for knowledge claims, in religion and different Areas of Knowledge? Number of Words: 1416 The aim of this essay is to show to what extent faith is related to reason and also to identify its importance in religion and different areas of knowledge. In general, it approaches faith as 'a strong belief that someone or something can be trusted to be right',1 that is usually rooted in a specific kind of personal emotion, and that may also reflect a more general, and often rationally explainable, relationship between the humankind and a higher power trusted as utmost authority. Combining all these features suggests that faith originates from something that is not necessarily reasonable but is strong enough to be trustworthy. This means that, in the context of religion, faith reflects a specific type of knowledge that exceeds our rational understanding of the world and yet offers some reasonable explanation of reality as each person claiming to be a believer comes up with the teachings of his own religion. In comparison, when we talk about faith in the field of non-religious knowledge, the situation is very different because knowledge here is commonly held to consist of 'the ...read more.

In Buddhism, for example, belief is basically a means to follow the teachings of Siddhartha Gautama, the founder of Buddhism, to understand one's karma and to achieve the ultimate state of enlightenment, called 'nirvana'. Buddha denied the immortality of the self as well as the obedience to any kind of supreme God. Instead, his religion preaches that 'we are temporal creations born to lives of sorrow and suffering'.7 In Buddhism faith comes as the inner power of every disciple to follow his own quest for nirvana, which is to step beyond the limits of both reason and faith as restricted states of his own self. Gautama believed that the 'self' never dies but it only rearranges the elements of one's identity until it gains perfection. Hence, the ultimate knowledge in this religion rely not only on pure faith in the Gospels, like in Christianity, but also on the whole experience of every Buddhist. Belief here does not impose a universal understanding of life but rather supports everyone in attaining their own nirvana. Yet, most of their knowledge claims presuppose faith because they are not based on something that has happened but on something that would possibly happen if the faith and determination are strong enough. For example, no clear knowledge about what lays beyond death or beyond nirvana is provided and the only close definition of this, which Buddha himself gave, was 'a condition, where there is neither earth nor water, neither air nor light, neither limitless ...read more.

Evolution is a 'world view, a philosophy of life and meaning, an attempt to explain the origin and development of everything from the elements of galaxies to people'10. As a theory without justification it is only a question of faith. Though many people reject religious claims as gullible, the base of biology also transpires to be unwarranted. Scientific knowledge, then, finds its final justification in certain assumptions or beliefs that may not be rationally grounded. The result is that this science gives an undisputable understanding of the world but its foundations are also a matter of faith. The belief in evolution as something true provides reason and a legitimate basis for other knowledge claims. Therefore, faith in biology is as important as facts themselves. As a conclusion, I would like to point out that faith and reason are interrelated because they both suggest confidence. Belief implies personal emotion when it is connected with religion. But in the field of science it involves a strong desire to enrich ourselves with understanding of the world and as Paulo Coelho says: 'when you want something, all the universe conspires in helping you achieve it.' 11 In that case having faith does not go, as it is usually considered, beyond the limits of rational thinking but rather sets the grounds for obtaining knowledge. Belief even serves as a cornerstone to any kind of understanding which is not gained by experience. Therefore, it can be considered a legitimate basis for knowledge claims but only if it does not confine and prevent this knowledge from being further developed. ...read more.