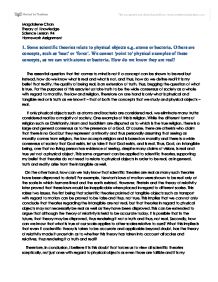 1. Some scientific theories relate to physical objects e.g. atoms or bacteria. Others are concepts, such as 'heat' or 'force'. We cannot 'point to' physical examples of these concepts, as we can with atoms or bacteria. How do we know they are real? The essential question that first comes to mind is not if a concept can be shown to be real but instead, how do we know what is real and what is not, and thus, how do we define real? It is my belief that reality, the quality of being real, is an extension of truth, thus, begging the question of what is true. For the purposes of this essay let us take truth to be the wide consensus of society as a whole with regard to morality, the law and religion. ...read more.

Thus, God, an intangible being, one that no living person has evidence of seeing, despite many claims of visions, is real and true yet not a physical object. This same argument can be applied to scientific theories, supporting my belief that theories do not need to relate to physical objects in order to be real, as in general, truth and reality arise from the intangible as well. On the other hand, how can we truly know that scientific theories are real as many such theories have been disproved to date? For example, Newton's laws of motion were shown to be real only at the scale in which humans lived and the earth existed. However, Einstein and the theory of relativity later proved that these laws would be inapplicable when placed in regard to different scales. ...read more.

Secondly, how can we know that what is true at our scale applies to other scales relative to ours? What this implies is that even if a scientific theory is taken to be accurate and applicable beyond doubt, has the theory of relativity made it uncertain as to whether this theory has taken into account all scales and relatives, thus rendering it a truth and real? Therefore, in conclusion, I believe it is this doubt that forces us to view all scientific theories sceptically, not just ones with regard to physical objects as even those are fallible and it is my personal view that scientific theories that have been accepted by society, after the examination of a scientific board, are real, regardless of their regard to the tangible or intangible. ?? ?? ?? ?? Magdalene Chan Theory of Knowledge Science Lesson #4 Homework Assignment ...read more.