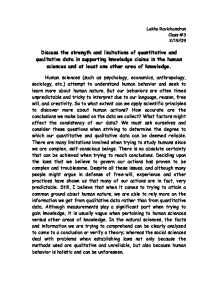 strength and limitations of quantitative and qualitative data

Lekha Ravichandran Class #3 2/19/09 Discuss the strength and limitations of quantitative and qualitative data in supporting knowledge claims in the human sciences and at least one other area of knowledge. Human sciences (such as psychology, economics, anthropology, sociology, etc.) attempt to understand human behavior and seek to learn more about human nature. But our behaviors are often times unpredictable and tricky to interpret due to our language, reason, free will, and creativity. So to what extent can we apply scientific principles to discover more about human actions? How accurate are the conclusions we make based on the data we collect? What factors might affect the consistency of our data? We must ask ourselves and consider these questions when striving to determine the degree to which our quantitative and qualitative data can be deemed reliable. There are many limitations involved when trying to study humans since we are complex, self-conscious beings. There is no absolute certainty that can be achieved when trying to reach conclusions. Deciding upon the laws that we believe to govern our actions has proven to be complex and troublesome. Despite all these issues, and although many people might argue in defense of free-will, experience and other practices have shown us that many of our actions are in fact, very predictable. ...read more.

Furthermore, it also allows for repetition of the same experiment to take place. We can explain most natural phenomenon using science, and quantitative measurements are the foundations of most natural sciences, such as physics and chemistry. Without the statistical data and graphs, we would not be able to explain the reasoning behind Newtonian mechanics or the atomic theory of gases. Natural science often paves the pathway and leads to more knowledge when studying human sciences. For example, studying the neurons in the brain can affect and influence the explanations for some human behavior. The laws obtained through natural science are more definite and deterministic because we are able to control the variables and constants in the experiment. But real life does not always tend to be able to work that way. "In the real world, it is often difficult to untangle a complicated web of causal relationships to determine which one is decisive." (Theory of Knowledge for the IB Diploma, 272) However, scientists have developed ingenious methods to combat these problems and still be able to run fairly successful and efficient experiments. For example, if we want to learn about how babies perceive the world, we must speculate in order to gain more insight upon this topic. But this type of experiment leans more toward qualitative data since we need descriptions to get some idea of the babies' minds and quantitative data would pretty much be useless. ...read more.

or low their math grades were - but rather it correlated to the time they spent studying (which was another part we added to the survey). This is an example of the fallacy of post hoc ergo propter hoc - "just because two things are correlated," it does not mean that the first is the cause of the second since there are other factors to be considered, especially when dealing with the human sciences. Qualitative analysis and data helps strengthen the evidence and knowledge gained through studying human nature. However, quantitative measurements are better suited towards natural sciences since human sciences have to deal with complex and holistic phenomena. Human sciences "lack the explanatory power of the natural sciences." Nevertheless, they give a great deal of insight pertaining human nature and more knowledge about our behaviors. Natural science is easier to defend and accept as the absolute truth because of its use of and need quantitative information. Despite these issues, however, human sciences are "neither as flawed as their critics believe nor as successful as their defenders hope." Many of it has to do with one's own individual perception of the nature of things they witness. Scientific research helps ascertain theories and ideas in natural sciences, but whether it will help unlock the mysteries of human beings and their behavior may always lie beyond our abilities to understand or gain knowledge about human sciences. ...read more.