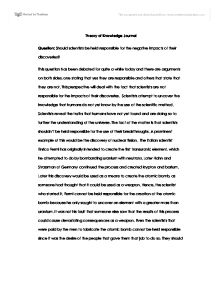 T.O.K. Question: Should scientists be held responsible for the negative impacts of their discoveries?

Theory of Knowledge Journal Question: Should scientists be held responsible for the negative impacts of their discoveries? This question has been debated for quite a while today and there are arguments on both sides, one stating that yes they are responsible and others that state that they are not. This perspective will deal with the fact that scientists are not responsible for the impacts of their discoveries. Scientists attempt to uncover the knowledge that humans do not yet know by the use of the scientific method. ...read more.

Later Hahn and Strassman of Germany continued the process and created krypton and barium. Later this discovery would be used as a means to create the atomic bomb, as someone had thought that it could be used as a weapon. Hence, the scientist who started it, Fermi cannot be held responsible for the creation of the atomic bomb because he only sought to uncover an element with a greater mass than uranium. It was not his fault that someone else saw that the results of this process could cause devastating consequences as a weapon. ...read more.

It is often said that science is the quest for truth, which to most scientists is the case. The fact that their inventions are being used for more destructive purposes is not their responsibility. If one were to agree that scientists are to be held responsible for their inventions then in the case of arsonists, who would they blame? The man who first tamed fire, would he be the one to blame? If so, where would we be without the other uses of that discovery? In the end the inventors cannot be held responsible for the irresponsibility of the people who use their inventions. ...read more.