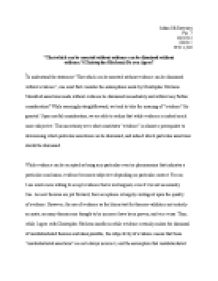 ﻿Adam McSweeney Per. 7 10/17/12 000315 W.C.1,519 ?That which can be asserted without evidence can be dismissed without evidence.?(Christopher Hitchens) Do you Agree? To understand the statement ?That which can be asserted without evidence can be dismissed without evidence?, one must first consider the assumptions made by Christopher Hitchens. Should all assertions made without evidence be dismissed immediately and without any further consideration? While seemingly straightforward, we tend to take the meaning of ?evidence? for granted. Upon careful consideration, we are able to realize that while evidence is indeed much more subjective. This uncertainty over what constitutes ?evidence? is almost a prerequisite to determining which particular assertions can be dismissed, and indeed which particular assertions should be dismissed. While evidence can be accepted as being any particular event or phenomenon that indicates a particular conclusion, evidence becomes subjective depending on particular context. For me, I am much more willing to accept evidence that is well argued, even if it is not necessarily true. As new theories are put forward, their acceptance is largely contingent upon the quality of evidence. However, the use of evidence as the litmus test for theories validity is not entirely accurate, as many theories one thought to be incorrect have been proven, and vice versa. Thus, while I agree with Christopher Hitchens insofar as while evidence certainly makes the dismissal of unsubstantiated theories and ideas possible, the subjectivity of evidence means that these ?unsubstantiated assertions? are not always incorrect, and the assumption that unsubstantiated need to be dismissed is fundamentally flawed. ...read more.

Because many were so quick to condemn the ruling, few actually took the time to investigate the trial itself, and so there was very little evidence that actually proved the men innocent. Relying instead on a more visceral reaction, the pardoning of the men was ultimately grounded in little more than guilt over police brutality related to the incident. However, careful examination of all mainstream accounts of the trial say the trial dragged on for 6 weeks, with the prosecution introducing absolutely no evidence. The trial itself was a fairly black and white issue, so why did it take court 6 weeks to convict the defendants? Further examination of this oddity by Professor Timothy Messer-Kruse yielded the actual transcripts of the trial, which indicated that the prosecution team did indeed have substantial evidence against the defendants. However, within 5 minutes of being published on Wikipedia, the revisions were taken down, with the editors citing a ?lack of verifiability?. In this case, despite the fact that both sides had ?evidence? supporting their beliefs, the acceptance of the more mainstream view goes to show the subjectivity of evidence. While Professor Messer-Kruse cited some of the only first-hand evidence available, Wikipedia refused to acknowledge his findings because they did not to conform to the evidence cited by every other primary source on the topic. The irony of this is the fact that all of the primary sources cite a lack of evidence as the only evidence necessary to pardon the defendants. ...read more.

Yet to the critics who praise Gaudi, my ?evidence? is only superficial, and ignores much of the religious significance of his work[4]. None the less, in such a subjective subject as art, it is virtually impossible to actually determine how to evaluate evidence. Because our perception of art is based on context, our evidence becomes opinions supported by a handful of subjective reasons. As a result, should my opinions on art be disregarded by a renowned art critic whose assertions are no better supported than mine? Because evidence can vary from situation to situation depending on context, dismissing evidence, or a lack of thereof, is infinitely subjective. What might be a well-supported claim backed by evidence to us might simply be nonsense to someone else with a different view point. Thus, I disagree with the assumption that all unwarranted assertions must be disregarded because determining the difference between an assertion and evidence is purely subjective. In the most literal sense of his words, Christopher Hitchens was correct in saying that ?that which can be asserted without evidence can be dismissed without evidence?. However, upon closer examination of not only the author?s intent behind the quote, as well as the inherent subjectivity behind the term ?evidence?, I ultimately disagree with Christopher Hitchens. While Hitchens was literally speaking of rejecting organized religion, the assumptions posited by the author?s social viewpoints are fundamentally flawed and serve to enlarge the potency of his thoughts. The inherent difference between what ?can be done? and what ?should be done? ultimately make Hitchens? position incorrect. ...read more.