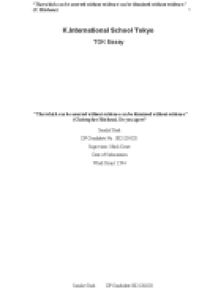 One example of a knowledge claim, without evidence, is the use of the Pythagoras theorem before it was proven. Mathematics is based on deductive reasoning from a set of postulates or self-evident truths. Hence in math evidence is proof. The Pythagoras theorem was used extensively in fields such as astrology and architecture to find distances between stars and to make similar triangles in buildings so that the foundation would be string. The reason for its use without evidence was that there was the requirement of a system. Having a system, even though invalid was better than having no theory at all. Therefore it can be concluded that when there is no existing paradigm, and there is a need of knowledge, a plausible knowledge claim may be used without evidence. The Boy Who Cried Wolf is, in my mind, an excellent example of a story that stresses on the importance of asserting something without evidence, that is still accepted. This reasserts the argument regarding security, but also shows that too many claims without any evidence to support them will ultimately result in the claims being dismissed without any evidence. Eventually, the boy paid for his folly with his life: when the wolf came to attack, the people of the village had been saturated by false claims about wolf attacks to take the boy seriously. ...read more.

Hence by disproving this, human resources were diverted towards fields in math thereby speeding up the pursuit in knowledge. Furthermore complex numbers can also be used to represent two dimensions. Hence it is used extensively in engineering. In general it can be concluded that knowledge claims that cannot be justified by reason simply or are against the common opinion of the people should not be dismissed, unless there is concrete evidence against the claim. The reason being that in the future, evidences for some of the knowledge claims may be found. So in a nutshell, knowledge depends upon beliefs and evidences for a knowledge claim may be discovered in the future. Therefore I do not agree with, “That which can be asserted without evidence can be dismissed without evidence.” I believe that if the knowledge claim comes from an expert than it can only be dismissed with counter evidence. This does not mean that it should be accepted and used. It should only be accepted and used either if there is the need for a system, due to no existing system, or when sufficient evidence is found. Reference: Belief quotes & quotations. (n.d.). Find the famous quotes you need, ThinkExist.com Quotations. Retrieved January 16, 2013, from http://thinkexist.com/quotes/with/keyword/belief/ Dykla, J. (n.d.). Encyclopædia Britannica Online School Edition. Encyclopædia Britannica Online School Edition. Retrieved January 11, 2013, from http://school.eb.com/all/eb/article-9403606?query=1919%20einstein&ct=null Encyclopædia Britannica Online School Edition. (n.d.). Encyclopædia Britannica Online School Edition. Retrieved January 11, 2013, from http://school.eb.com/all/eb/article-256584?query=1919%20einstein&ct=null Samkit Shah DP Candidate 002120-028 ...read more.