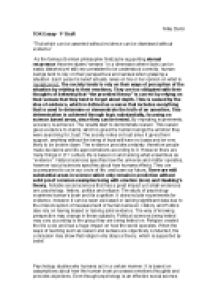 ﻿Nilsu Derici TOK Essay- 1st Draft ?That which can be asserted without evidence can be dismissed without evidence? As the famous German philosopher Nietzsche supporting eternal recurrence theorem states ?senses.? In a dimension where facts can be easily distorted yet still very persistent to be understood correctly, human beings tend to rely on their perspectives and senses when grasping a situation. Each person?s belief actually relies on his or her opinion on what is moral/correct. The society tends to rely on their ways of perception of the situation by relating to their emotions. They are too obligated with their thoughts of believing that ?the provided theory? is correct by relying on their senses that they tend to forget about depth. This is caused by the idea of evidence, which is defined as a sense that includes everything that is used to determine or demonstrate the truth of an assertion. This determination is achieved through logic substantially, focusing on science-based areas, since they can be tested. By repeating experiments, accuracy is achieved. ...read more.

When the ways of learning such as reason and senses are objectively conducted, the conclusion may show that religion only stays a theory, which is supported by belief. Psychology studies why humans act in a certain manner. It is based on assumptions about how the human brain processes emotions thoughts and provides objectives. Even though psychology is an effective social science, it is not evidential since most of it stays on theories. It is possible to make predictions about human behavior (psychology), but it is nearly impossible what each individual would do. The experiments made in that field are not accurate Lab experiments, where variables are measures. It is just observation and opinion. The more scientific studies deal with matter that is remaining able, however since psychology is related with brains processing and emotions it can easily change. The conclusion may be drawn about how psychology is inexact because prediction of behavior is unreachable. ...read more.

Since there are no correct answers in politics, certainty is difficult being reached. Many of the systems presented remains as in theory. And it is almost impossible to prove what is the right system. By opposing new perspectives and regimes the evidential subject on politics can be changed. Religion is also an influential and important knowledge heavily affecting the society, which may lack physical evidence. There were situations where religion gave strength to the ones facing poverty and socioeconomic difficulty, and times where it was used as an excuse to consecutive wars. Religion is one of the most debated topics. It settles ethics and the rights. As a very substantial topic in our day, the biggest issue it faces is the evidence and the sensing of the ideology. Since human beings demand to understand and comprehend the idea of religion and God, the issue arises. The idea of religion may only remain as spirit or belief since the ways of knowledge logic and perception does not merely stand in it. It does not remain as a scientific and comprehendible fact, making it questionable. ...read more.