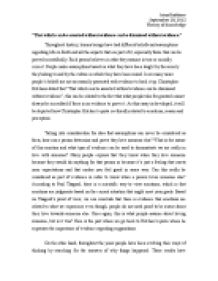 ﻿Irina Baittiner September 28, 2012 Theory of Knowledge ?That which can be asserted without evidence can be dismissed without evidence.? Throughout history, human beings have had different beliefs and assumptions regarding life on Earth and all the aspects that are part of it, especially those that can be proved scientifically. Each person believes in what they assume is true or morally correct. People make assumptions based on what they have been taught by the society they belong to and by the culture in which they have been raised. In so many cases people?s beliefs are not necessarily presented with evidence to back it up. Christopher Hitchens stated that ?That which can be asserted without evidence can be dismissed without evidence?, this can be related to the fact that what people take for granted cannot always be accredited if there is no evidence to prove it. As this essay is developed, it will be depicted how Christopher Hitchen?s quote is ethically related to emotions, reason and perception. Taking into consideration the idea that assumptions can never be considered as facts, how can a person determine and prove they love someone else? ...read more.

These results have changed people into rational beings who nowadays are in need of factual evidence in order to believe what surrounds them. In previous decades and even today, myths have existed. Earlier, people would just believe that every myth was true without even asking for physical proves. In this day and age, there are people trying to demonstrate if those myths are true by trail and error methods among others. With this we are able to see how the way of thinking of humans has changed over time from being credulous to being more logical. Another perfect example, in accordance to scientists, is the extinction of dinosaurs. This theory expresses how dinosaurs were banished from the face of the Earth as consequence of the impact of a comet/meteor. This led to the breaking of the subterranean waters that situated the continents where they are located in the present day. It is also said that at the time when the meteor/comet stroke the Earth, mountains were created while carrying the sediments up with them. Now the question is, how do we know today that this is what really happened millions of years ago? ...read more.

this argument, ?How can we tell whether a tree falling in the woods produces sound if there is no one that could listen to it or see it fall?? There are several examples in which someone knows what happens through their senses. For instance, when you see that lunch is ready, you know it?s time to eat. When someone smells coffee, they know it is coffee time. When there is water boiling for tea and you listen the squeaking sound that the teapot makes, you know that it is time to get the teapot off the stove, also when you taste something that is sweet, you know you are eating a dessert, or if you touch something that is hot, your reaction will be to take your hand off it. These examples demonstrate that there is no need of a scientific method to have evidence that something took place; we can instead use our senses to have the evidence. This essay has developed the quote by Christopher Hitchens ?That which can be asserted without evidence can be dismissed without evidence? As this essay was developed, it depicted how Hitchen?s quote is ethically related to emotions, reason and perception. ...read more.