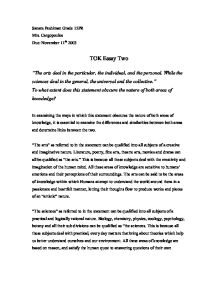 &quot;The arts deal in the particular, the individual, and the personal. While the sciences deal in the general, the universal and the collective&quot; - To what extent does this statement obscure the nature of both areas of knowledge?

The arts like literature, fine arts, drama, do indeed deal in the particular subjects that are of special significance to the authors, playwrights or artists. For example, the Mexican artist Frida Kahlo created self-portraits, using herself as a subject to portray the emotions of insecurity, and self-perception that were of a special significance to her. She did not create paintings of her neighborhood cat, for example, as this subject did not particularly interest or enthrall her. It was the method of stretching her soul across a canvas and finding her own emotions in doing so, that were of particular interest to her. This ties in to the next point that the arts deal in the individual. Poetry, prose, paintings and drama are usually pieces of work that are created by the authors, playwrights or artists to put across a point. Arthur Miller, for example, who wrote many famous plays like "All my sons" and "Death of a Salesman", sought to put across his individual ideas and beliefs of society and it's norms and rules. This illustrates further, how the arts can deal in the individual aspirations of the "artists". Frida Kahlo's self-portraits also help to exemplify the fact that the arts deal in the personal. Her paintings are very personal and unique, and this personalization is what appeals to art-lovers all over the world. ...read more.

While the diary dealt with the personal and individual subject of Anne's life and times, it also provided a general outline that teenagers all over the world could identify with. The fact that her book actually got translated into so many different languages proves that despite the book being very personal, and written of individual beliefs, teenagers, adults and people all over the world from all wakes of life somehow identified with this sensitive, charming and interesting teenager. This is despite the fact that, after almost five decades have passed, and The Nazis were a horror that are limited to textbooks and history lessons, people continue to universally and collectively embrace Anne's message. The message of hope, faith and perseverance. This is just one example of how the implications of the ways of knowing the arts range considerably. In conclusion, and in my personal opinion, the statement "The arts deal in the particular, the individual, and the personal. While the sciences deal in the general, the universal, and the collective" does obscure the natures of both areas of knowledge in that, it limits the ways of knowing to a considerable amount. In the theory of knowledge it is vital to understand that in any area of knowledge, there are many more ways of knowing than those that are apparent, established or pre-determined. 1331 words. ...read more.