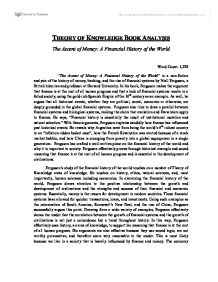 The Ascent of Money Book Report

THEORY OF KNOWLEDGE BOOK ANALYSIS The Ascent of Money: A Financial History of the World Word Count: 1,238 "The Ascent of Money: A Financial History of the World" is a non-fiction analysis of the history of money, banking, and the rise of financial systems by Niall Ferguson, a British historian and professor at Harvard University. In his book, Ferguson makes the argument that finance is at the root of all human progress and that a lack of financial systems results in a failed society, using the gold-rich Spanish Empire of the 16th century as an example. As well, he argues that all historical events, whether they are political, social, economic or otherwise, are deeply grounded in the global financial systems. Ferguson also tries to draw a parallel between financial systems and biological systems, making the claim that evolution and Darwinism apply to finance. He says, "Financial history is essentially the result of institutional mutation and natural selection." With these arguments, Ferguson explains candidly how finance has influenced past historical events. He reveals why Argentina went from being the world's 6th richest country to an "inflation-ridden basket case", how the French Revolution was started because of a stock market bubble, and how China is emerging from poverty into a global superpower in a single generation. ...read more.

Ferguson's arguments are so reasonable and true that they are easily proved through evidence from a wide range of countries and empires from the past. Although Ferguson's work is reasonable and offers great insight into the history of finance, a number of flaws and issues of knowledge arise that give us some interesting questions to think about. The first issue is Ferguson's misuse of language. Ferguson tries to make a connection between financial systems and biological systems, saying that financial systems have genes, the potential for spontaneous mutation, competition between one another, natural selection, scope for speciation, and scope for extinction. While this may be an accurate and fair metaphor, it is odd that he relies on these biological terms to describe financial systems instead of describing them for what they are. At times, when making this connection, Ferguson stretches his analysis and, as a result, weakens his main arguments. A further example of this is his comparison of the extinction of dinosaurs to the extinction of large financial institutions. The second issue of knowledge arises when Ferguson tries to take ethics out of the discussion as he feels the reader will understand his telling of the financial history of the world better without it. ...read more.

In order to further our knowledge of the world in which we live, it is imperative that we appreciate and understand the scope, relevance and importance of Ferguson's key argument: that successful financial and economic systems are at the root of all human progress and, by extension, will continue to be so. In conclusion, Ferguson effectively explores finance's role in history. Drawing from a variety of historical examples, he argues that finance is at the root of all human progress. Ferguson's work enlightens us on the importance of financial systems and allows us to gain a better understanding of our world. The author's work also raises some questions on issues of knowledge, such as when he removes ethics from his discussion believing the reader will gain a better knowledge of the history of finance without it. Ferguson has given us key knowledge in an area that many individuals know far too little about. With the knowledge that finance is the key to growth as a civilization, we can avoid the fate that many past civilizations have endured as a result of poor financial systems. Work Referenced Ferguson, Niall. The Ascent of Money: A Financial History of the World. New York: The Penguin Press, 2008. ?? ?? ?? ?? 2 ...read more.