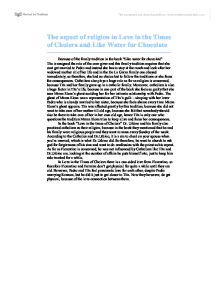 The ghost of Mama Elena was a representation of Tita's guilt - sleeping with her lover Pedro who is already married to her sister, because she feels shame every time Mama Elena's ghost appears. Tita was affected greatly by this tradition, because she did not want to take care of her mother till old age, because she felt that somebody should also be there to take care of her in her own old age, hence Tita is only one who questions the tradition Mama Elena tries to keep alive and faces her consequences. In the book "Love in the times of Cholera" Dr. ...read more.

As far as Florentino is concerned, he was not influenced by Catholism like Tita and Dr.Urbino are, looking at the number of affairs he puts himself into, just to keep him side-tracked for a while. In Love in the Times of Cholera there is a one-sided love from Florentino, so therefore Florentino and Fermina don't get physical for quite a while until they are old. However, Pedro and Tita feel passionate love for each other, despite Pedro marrying Rosaura, but he did it just to get closer to Tita. Now they however, do get physical, because of the love connection between them. ...read more.