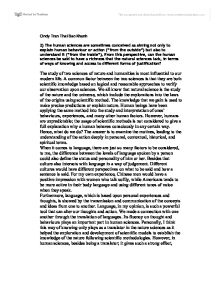 Cindy Tran Thai Bao Khanh 2) The human sciences are sometimes conceived as aiming not only to explain human behaviour or action ("from the outside") but also to understand it ("from the inside"). From this perspective, can the human sciences be said to have a richness that the natural sciences lack, in terms of ways of knowing and access to different forms of justification? The study of two sciences of nature and humanities is most influential to our modern life. A common factor between the two sciences is that they are both scientific knowledge based on logical and reasonable approaches to verify our observation upon sciences. We all know that natural science is the study of the nature and the universe, which include the explorations into the laws of the origins using scientific method. The knowledge that we gain is used to make precise predictions or explain nature. Human beings have been applying the same method into the study and interpretation of ones' behaviours, experiences, and many other human factors. However, humans are unpredictable; the usage of scientific methods is not considered to give a full explanation why a human behaves consciously in any certain way. ...read more.

end of our friendship, eventually, when we were calm enough to sit down and talk, we realized that there was misunderstanding due to the way that we spoke as the language that we used was insulting. If I applied the scientific methodology into my friend's behaviour, I could explain that he was mad and angry due to the annoyance of my action, everyone is different, and people could not always agree with each other in every action, therefore, when I thought positively about my action, my best friend was mad. However, I could neither give any prediction nor hypothesis for the future if I did not understand him well, and I could never knew what was going to happen, since all of our reaction was unpredictable and based upon our own feelings and emotions. Moreover, we cannot apply one's reaction to another to find out a solution to the problem if we did not understand each other so well. In addition to the richness of human science, emotions play an important part in our judgement system. People can give out horrible judgement and have negative impression about someone just by looking at them, but we do understand that it was our emotion that sharpens the idea. ...read more.

Besides that, they can make up hypothesis relied the scientific methodology, and subsequently carry out experiment testing to ensure their information and use it as a benefit, contributing to our life. The richness of nature sciences is the exploration of the nature physically, chemically and biologically. Do consider that beliefs and interests of human scientists might have impact and influence on their assumption and conclusion in certain fields like human sciences but not natural sciences as they are always clear on what is wrong and right. In conclusion, from the way of classifying the two sciences, we can tell that there would probably be differences. We can argue that human sciences have the richness that the natural sciences lack, or vice versa, but to me, both are correct, just one is a little truer than the other. 'Human sciences' is an interesting subject to me. Even though it is a study of human behaviours and is studied and researched in university, I still believe we can learn it by ourselves through experiences; having someone to understand you is one of the most precious appreciations in life. Human beings are emotional, and a field for an everlasting-exploration, while natural sciences have their own richness as the invention and discovery of everything in the universals. Word Count: 1213 ...read more.