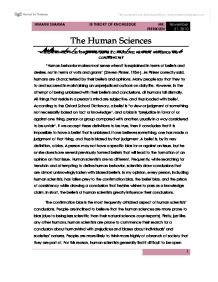 The Human Sciences Prompt: In what ways might the beliefs of human scientists influence their conclusions? "Human behavior makes most sense when it is explained in terms of beliefs and desires, not in terms of volts and grams" (Steven Pinker, 1954-). As Pinker correctly said, humans are characterized by their beliefs and opinions. Many people say that they try to and succeed in maintaining an unprejudiced outlook on daily life. However, in the attempt of being unbiased with their beliefs and conclusions, all humans fail dismally. All things that reside in a person's mind are subjective, and thus loaded with belief. According to the Oxford School Dictionary, a belief is "a view or judgment of something not necessarily based on fact or knowledge", and a bias is "prejudice in favor of or against one thing, person or group compared with another, usually in a way considered to be unfair". If we accept these definitions to be true, then it concludes that it is impossible to have a belief that is unbiased. If one believes something, one has made a judgment of that thing, and thus is biased by that judgment. A belief is, by its very definition, a bias. ...read more.

While trying to draw a conclusion, the confirmation bias leads to scientists only recognizing evidence that contributes to their conclusion. They only notice confirming evidence like such because they are biased to believe that their conclusion is true and they somehow have to prove it to be so. Perhaps the only solution to such confirmation biases is actively pursuing contradictory evidence, and analyzing and acknowledging criticisms that seek to discredit their biased research and conclusions. A second obstacle to bias-free conclusions is the prison of consistency, which is closely interwoven with the confirmation bias. Like described in the previous paragraph, the confirmation bias is when human scientists only taking into account evidence that supports their beliefs. Similarly, the prison of consistency is when a human scientist refuses to accept his/her confirmation bias as a confirmation bias and proceeds with his/her conclusion. The human sciences are a branch of study where there are scads and scads of disagreement and controversy simply because humankind is an unpredictable branch of study, due to the fact that all humans are different and emotional attachments are less concrete than mathematical ones. This leads to controversy. This kind of controversy most definitely causes some scientists' conclusions to be trampled under those of others. ...read more.

Finally, he accepted knowledge by authority and thus imprisoned himself in a prison of consistency - that Swedish humans transformed into chickens in 2000. All these little fallacies combined together to form the belief bias - a bias that proves that beliefs do affect a human scientist's conclusions. A human scientist can fail to see that his/her conclusion does not make any sense if he/she simply believes that it is and has to be true. In conclusion, human scientists' conclusions can rarely ever be free of belief. Belief affects conclusions in human science because of the unpredictability of the nature of humankind which inclines human scientists to easily fall prey to biases such as the confirmation bias, the prison of consistency, and the belief bias. People take the fact that the human sciences are less law-based than the natural sciences too seriously, and thus believe that their conclusions can be true even if they are completely random. Additionally, people believe that what they are proving is true, and thus only notice evidence that proves their conclusion true. Finally, people might only want to draw and prove a conclusion simply because they believe it to be true. To sum it up, the beliefs of human scientists significantly affect their conclusions about humankind. ?? ?? ?? ?? HIMAINI SHARMA IB THEORY OF KNOWLEDGE MR. FRERIKSEN November 21, 2010 1 ...read more.