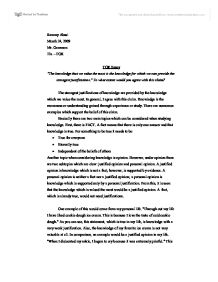 The knowledge that we value the most is the knowledge for which we can provide the strongest justifications.&quot; To what extent would you agree with this claim?

Rammy Abssi March 24, 2009 Mr. Gammon 11a - TOK TOK Essay "The knowledge that we value the most is the knowledge for which we can provide the strongest justifications." To what extent would you agree with this claim? The strongest justifications of knowledge are provided by the knowledge which we value the most. In general, I agree with this claim. Knowledge is the awareness or understanding gained through experience or study. There are numerous examples which support the belief of this claim. Basically there are two main topics which can be considered when studying knowledge. First, there is FACT. A fact means that there is only one answer and that knowledge is true. For something to be true it needs to be: * True for everyone * Eternally true * Independent of the beliefs of others Another topic when considering knowledge is opinion. ...read more.

This is an example of a justified opinion because it is not eternally true and true for everyone. When I dislocated my ankle playing football, I began to cry and I was shaking because of the amount of pain I was in. This opinion is justified because I actually have been through the pain and I have felt the result of dislocating an ankle. Now you can relate this back to the main idea of: "The knowledge that we value the most is the knowledge for which we can provide the strongest justifications." The first opinion is a personal opinion and had a very weak justification; in fact it had no justification. This is in relation of the knowledge which we value, and it is clearly seen that my favorite ice cream flavor is not valuable knowledge. On the other hand, the second example, a justified opinion, had a justification, and in result it was seen that the second opinion was knowledge which was more valuable. ...read more.

Emotion is not very valuable because it is not suitable and useful for almost any claim. When emotion is brought up in an argument as support, it results in a very weak argument. In fact, that side of the argument becomes illogical due to the fact that emotion is very abstract and has no strong justifications. Overall, I believe that the knowledge that we value the most is the knowledge for which we can provide the strongest justifications for. This is clearly shown in many different examples, including an example of a personal opinion and a justified opinion. An opinion which is valuable knowledge would be a justified opinion. A counter argument to why I agree with this claim would be the fact that love is valuable and love has very weak, if no justifications. Love is an emotion and in conclusion emotions are not a valuable knowledge. This is because using emotion as support is illogical and therefore, emotion would not be valuable knowledge. Word Count: 808 ...read more.