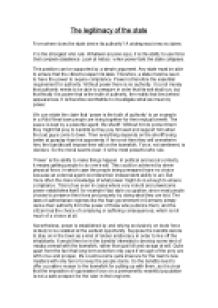 The Legitimacy of the State. From where does the state derive its authority?

﻿The legitimacy of the state From where does the state derive its authority? A widespread view exclaims: It is the strongest who rule. Whatever anyone says, it is the ability to use force that compels obedience. Look at history: when power fails the state collapses. This position can be supported by a simple argument. Any state must be able to ensure that the citizens respect its laws. Therefore, a state must be seen to have the power to require compliance. Power is therefore the essential requirement for authority. Without power there is no authority. It is not merely that authority needs to be able to pressure in order that its writ shall run, but that finally it is power that is the truth of authority, the reality that lies behind appearances. It is therefore worthwhile to investigate what we mean by power. We can relate the claim that ?power is the truth of authority? to an example. In a Wild West town people are living together for their mutual benefit. The peace is kept by a powerful agent, the sheriff. ...read more.

So the bandits need to offer a positive reason to the townsfolk for putting up with them, as it is clear that the imposition of oppressive force on a permanently resentful population is not a safe prospect for the ruler in the long term. In practice, the citizens need a positive reason for obeying beyond the fear of unpleasant consequences should they misbehave. So a ruler who wants to avoid deposition with usually offer the people something, even this is only more security than they would enjoy under conditions of anarchy. This peace is kept by a combination of fear and hope: the citizens fear that something unpleasant will happen to them if they misbehave, and their hope that a similar fear will inhibit others. Authority rests not only on brute force but also on the consent of those ruled ? even if it is only an implied and somewhat fearful consent. We can call this kind of consent prudential consent. To secure prudential consent it may be enough to be the lesser of two evils. There is a distinction between authority and power. ...read more.

Society was therefore no longer anarchic. But the state system, which grew out of the social contract, was anarchic (without leadership). Just as the individuals in the state of nature had been sovereigns and thus guided by self-interest and the absence of rights, so states now acted in their self-interest in competition with each other. Just like the state of nature, states were thus bound to be in conflict because there was no sovereign over and above the state (i.e. more powerful) capable of imposing social-contract laws. Rousseau Jean-Jacques Rousseau outlined a different version of social contract theory, based on unlimited popular sovereignty. Although Rousseau wrote that the British were perhaps at the time the freest people on earth, he did not approve of their representative government. Rousseau believed that liberty was possible only where there was direct rule by the people as a whole in lawmaking, where popular sovereignty was indivisible. But he also maintained that the people often did not know their "real will," and that a proper society would not occur until a great leader arose to change the values and customs of the people, likely through the strategic use of religion. ...read more.