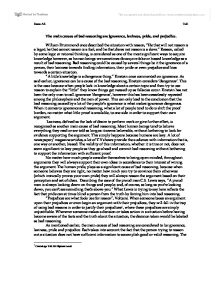 The main causes of bad reasoning are ignorance, laziness, pride, and prejudice.

The main causes of bad reasoning are ignorance, laziness, pride, and prejudice. William Drummond once described the situation with reason, "He that will not reason is a bigot; he that cannot reason is a fool; and he that dares not reason is a slave." Reason, called by some logic or rational thinking, is considered as one of the most significant ways to acquire knowledge however, as human beings we sometimes do acquire false or biased knowledge as a result of bad reasoning. Bad reasoning could be caused by several things be it the ignorance of a person, their laziness towards finding information, their pride or even prejudice and bias towards a certain situation. "A little knowledge is a dangerous thing." ...read more.

Laziness, defined as the lack of desire to perform work or give further effort, is recognized as another main cause of bad reasoning. Most human beings tend to believe everything they read or are told as long as it seems believable, without bothering to look for evidence supporting the argument. This simply happens because humans are lazy. A lot of newspaper/ magazine articles, a lot of T.V shows provide the audience with information that is, one way or another, biased. The validity of this information, whether it is true or not, does not seem significant to lazy people as they go ahead and commit bad reasoning without bothering to support the information with sufficient proof. No matter how much people consider themselves to being open-minded, throughout arguments they will always support their own ideas in accordance to their interest of wining the argument. ...read more.

Whenever someone makes a decision or takes action in a situation before having become aware of the facts and the truth about the situation, the decision taken would be labeled as bad reasoning. As mentioned earlier, the main causes of bad reasoning are considered to be ignorance, laziness, pride and prejudice. Each takes into account the fact that the person trying to reason out a situation does not have sufficient information to accomplish good or valid reasoning. The goal to 'win the argument' is also a factor of bad reasoning as it blinds the person from all facts and proofs and forces him into accounting for nothing except the goal to win, even if it meant proving his wrong ideas right. 1 Cambridge ToK IB Diploma book ?? ?? ?? ?? Rana Ali ToK ...read more.