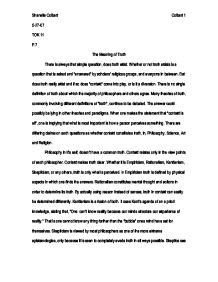 The Meaning of Truth

The Meaning of Truth There is always that simple question, does truth exist. Whether or not truth exists is a question that is asked and "answered" by scholars' religious groups, and everyone in between. But does truth really exist and if so does "context" come into play, or is it a diversion. There is no single definition of truth about which the majority of philosophers and others agree. Many theories of truth, commonly involving different definitions of "truth", continue to be debated. The answer could possibly be lying in other theories and paradigms. When one makes the statement that "context is all", one is implying that what is most important is how a person perceives something. There are differing claims on such questions as whether context constitutes truth, in, Philosophy, Science, Art and Religion. Philosophy in it's self, doesn't have a common truth. Context relates only in the view points of each philosopher. Context makes truth clear. Whether it is Empiricism, Rationalism, Kantianism, Skepticism, or any others, truth is only what is perceived. In Empiricism truth is defined by physical aspects in which one finds the answers. Rationalism constitutes mental thought and actions in order to determine its truth. ...read more.

But context gives existence to theses scientific theories which can relate them to truth, but not necessarily give actual truth. Art plays an immense role in what Europeans thought of as their discovery of truth. To speak of religious art in the sense that religious themes are depicted in the art, religious persons were the artists, or that some special religious group or church has decided that the art is orthodox and therefore official? All of these definitions have been used at one time or another to define religious art. But does this constitute truth in context? The context in art plays a serious role, without being able to determine the context of Art in itself. By doing this, then and only then would one be able to find truth. Another form of "art isthe so-called Venus of Willendorf a sculpture from the Paleolithic era", which depicts a pregnant woman. This was looked upon at the time, as a symbolic figure for what all women should look like. Abstract art such as the works of Pablo Picasso based on the time era his paintings were accepted by the people of a different age, but if the paintings based solely on context, had been put into the Renaissance, the people of that era would have said his painting were not true art. ...read more.

The theological model of God can play a very powerful role in the ideology based on whether or not there is an existence for truth in context of the bible or gospels. Based off of Subjective and Objective views on the topics at hand, many philosophers Christians, and scientists used their own belief systems to come up with there answers just as Artisans used the time eras to come up with the way they should use there "art" ,or context in the art, to show significance and value. Such as the subjective view point on philosophy and science, each have a different philosopher's or scientist's ideology, which then expands into an objective reasoning on the theories that were established. Or the subjective views of an artist, what they want to create, their ways in doing it, and the obvious objectivity of Christianity in the answer for truth in Christ Jesus. These are all factors that provide the answers for whether truth lies in the very context that holds significance in it. Therefore context does constitute truth in the sense that truth is based off of context in order to define what is right and/or wrong, significance and insignificance or even what could become a possible new theory or law. Being left with this, context does constitute truth, but does context give existence to truth? Yes. ...read more.