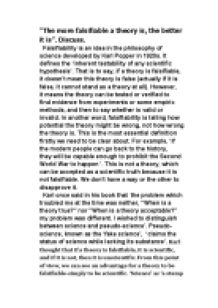 The more falsifiable a theory is, the better it is. Discuss.

﻿?The more falsifiable a theory is, the better it is?. Discuss. Falsifiability is an idea in the philosophy of science developed by Karl Popper in 1920s. It defines the ?inherent testability of any scientific hypothesis?. That is to say, if a theory is falsifiable, it doesn?t mean this theory is false (actually if it is false, it cannot stand as a theory at all). However, it means the theory can be tested or verified to find evidence from experiments or some empiric methods, and then to say whether is valid or invalid. In another word, falsifiability is telling how potential the theory might be wrong, not how wrong the theory is. This is the most essential definition firstly we need to be clear about. For example, ?if the modern people can go back to the history, they will be capable enough to prohibit the Second World War to happen ?. This is not a theory, which can be accepted as a scientific truth because it is not falsifiable. We don?t have a way or the other to disapprove it. Karl once said in his book that ?the problem which troubled me at the time was neither, "When is a theory true?" ...read more.

Therefore, in order to make their achievements more scientific, scientists are encouraged to try hard to deny the theory and keen on finding the drawbacks of the theory. This process is the process for the science to getting improved. As many aspects of the negativity of the theory could be considered during the extended study of how to falsify, and possibly helping to correct the theory further. So the theory, which experienced challenges and tests, is supposed to achieve a height near ?perfect?. Therefore, the more falsifiable the theory is, the more potential to be tested, and more possible to be found problems, then, more likely to be corrected and become a better convincing theory. However, there are criticisms of Karl Popper. Firstly, the falsification does work in the theory, but it?s not always conclusive in practice. Scientists don?t work by falsification. For example, we know that in the magnetic field, the like repels, the dislike attracts. If in one experiment, the results are opposite. Will the operator say that he has knocked down the theory and it should be abandoned now? Definitely no. He will think about the possible mistakes in the apparatus and the method he used. His result is only a counter-example, in practice, it is far not enough to overturn a law of nature. ...read more.

Especially for Yi Jing, it has been regarded as one of the most important and intellectual work in Chinese cultural history. But in term of falsifiability, it?s considerably difficult to say. There are too many variables in the observations and experiments, which are difficult to control. These two ideas themselves have been extremely subtle as ?complex truth?. Just imagine if people find difficulties to understand them thoroughly, it?s much harder for them to come up with ideas to falsify them. So although possibly there are doubts on their falsifiability in order to be ?science?. It?s not the fault of theories themselves, it rather be a boundary of human?s current abilities. But just as the earthquake prediction, if it?s helpful, people use it. And when human?s abilities are strong enough, they would find ways to try to falsify the theories, making them falsifiable later on. To sum up, theoretically falsifiability is a useful tool to differ ?science? from ?pseudo science?. It symbolizes the theory?s potential to be tested, meanwhile, improved; On the other hand, we should understand the gap between the theories and practice, working with it critically and carefully in the practical cases. ? Philosophers are the driving force in determining what factors determine the validity of scientific results?, but after all, science is realistically aiming to advance people?s living standard in the long term. ...read more.