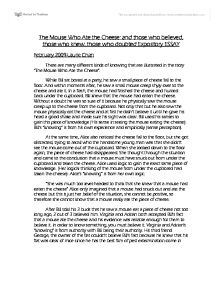 The Mouse who ate the cheese

The Mouse Who Ate the Cheese: and those who believed, those who knew, those who doubted Expository ESSAY February 2009-Laurie Chan There are many different kinds of knowing that are illustrated in the story "The Mouse Who Ate the Cheese". While Bill sat bored at a party, he saw a small piece of cheese fall to the floor. And within moments after, he saw a small mouse creep shyly over to the cheese and ate it. In a flash, the mouse had finished the cheese and hurried back under the cupboard. Bill knew that the mouse had eaten the cheese. Without a doubt he was so sure of it because he physically saw the mouse creep up to the cheese from the cupboard. ...read more.

When she looked down to the floor again, the piece of cheese had disappeared. She thought through the situation and came to the conclusion that a mouse must have snuck out from under the cupboard and taken the cheese. Alice used logic to gain the exact same piece of knowledge. (Her logical thinking of the mouse from under the cupboard had taken the cheese). Alice's "knowing" is from her own logic. "She was much too level-headed to think that she knew that a mouse had eaten the cheese" Alice only imagined that a mouse had snuck out and ate the cheese but this is just her belief of the situation, she cannot be positive, so therefore she cannot know that a mouse really ate the piece of cheese. ...read more.

In order to know something, you must believe it. Virginia and Adrian's "knowing" is from authority with Bill being their authority. His third friend George, the owner of the flat couldn't believe Bill's fact because he knew that his flat was clear of mice since he has the best firm of pest extermination come in and check it over regularly. But George doesn't know or believed that the mouse ate the cheese because he's convinced that his flat was mice free. George's "knowing" is from his own introspection/self-awareness. So in the end, with great anger, George never did know that the mouse ate the cheese. Alice believed that a mouse must've eaten the cheese but still she doesn't know it for real. Bill, Virginia and Adrian were the only three people who knew that the mouse ate the cheese. ...read more.