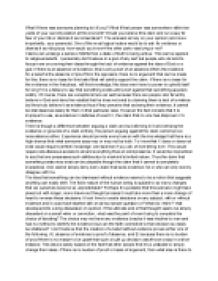 The Need for Evidence to Support Claims

What if there was someone planning to kill you? What if that person was somewhere within ten yards of your current position at this moment? Would you believe this claim and run away for fear of your life or dismiss it as nonsensical?  The answers all rely on your opinion (and more importantly, your paranoia). One of the most logical routes would be to ask for evidence or dismiss it as ridiculous; how would you know if the other party was lying or not? Claims can undergo a series of shifts from a state of truth to being untrue. This can be applied to religious beliefs.  I personally don’t believe in a god of any sort but people who do tend to focus more on proving their ideas through the lack of evidence against the idea of God or a god. If there is an absence of evidence, this is only proof of an absence.When the evidence for a belief is the absence of proof from the opposers, there is no argument that can be made for this: there is no base for this belief that will solidly support the claim. ...read more.

Perhaps it is possible that this scenario might take place but with longer, more drawn-out thought process it must take more than a mere change of heart to reverse these decisions. It took time to create decisions on any subject, with or without evidence and it could have started with an all too simple question of ?What do I think?? that developed into a long discussion on opinion. If the ultimate end of that thought was to be simply discarded on a small whim or conviction, what was the point of even trying to complete the choice of deciding? The choice may not have any evidence (maybe it was intuitive to man and had no method to identify the evidence) but can the faith connected to that decision so easily be shattered? I don?t believe that the creation of a belief without evidence proves either one of the following: A). absence of evidence is proof of absence, and B. because there is no burden of proof there is no reason to be upset that such a built up decision was thrown away in a short instance. ...read more.

The knowledge thus became formally true and was discarded after a sharp, painful realization. What was once true on the sole basis of the absence of another reality resulted in the creation of another idea with greater physical evidence. The idea behind evidence is that it is supposed to help support claims and ideas of truth so that they might express more meaning. If there is no base to logically prove the idea and create meaning so if there is nothing to support the house, what house is left behind to stand? It is a very unstable house. However, ideas without evidence cannot be supported for long because in many cases the basis of their ?evidence? is the fact that there is a lack of evidence to prove the idea?s nonexistence. Because of this, it may be dismissed without evidence. Ideas created on assumptions can be dismissed and may naturally extinguish themselves because of the severe fault of having ?blind faith? as the only source pulling the statement into the ?granted as true? section of the brain. Without evidence claims lack sufficient strength to sustain their own arguments. ...read more.