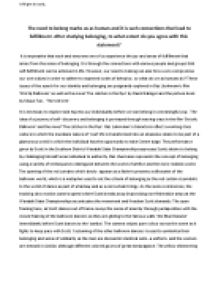 The need to belong marks us as human and it is such connections that lead to fulfillment. After studying belonging, to what extent do you agree with this statement?

﻿It Might be said; The need to belong marks us as human and it is such connections that lead to fulfillment. After studying belonging, to what extent do you agree with this statement? It is imperative that each and everyone one of us experience the joy and sense of fulfillment that arises from the sense of belonging. It is through the connections with various people and groups that self-fulfillment can be achieved in life. However, our need to belong can also force us to compromise our own values in order to adhere to expected codes of behavior, so what do we as humans do? These issues of the search for our identity and belonging are poignantly explored in Baz Llurhmann?s film ?Strictly Ballroom? as well as the novel ?The catcher in the Rye? by David Salinger and the picture book by Shaun Tan , ?The red tree?. It is necessary to explore and express our individuality before we can belong in a meaningful way. The idea of a journey of self- discovery and belonging is portrayed through varying ways in the film ?Strictly Ballroom? and the novel ?The catcher in the Rye?. Baz Luhrmann?s characters reflect a working class culture in which the mundane nature of ?real? life is transformed into an obsessive desire to be part of a glamorous world in which the individual has the opportunity to take Centre stage. ...read more.

An example of his desired solo status is when Holden scores a date with the character Sally Hayes, he deliberately sabotages it with his outrages and inappropriate behavior towards her. The date ends with Sally Hayes being scared off by Holden?s behavior and thus illustrates Holden?s constant need to remain alone as a way of protecting himself, Just as he wears his hunting hat to advertise his uniqueness and therefore, expressing his individuality. The red hunting hat is one of the most recognizable symbols. It signifies Holden?s desire to be different and his rebellion against the pressures to live life according to socially prescribed rules when he states ?I shoot people with this hat?. The color red is significant as it connects Holden with his red-headed siblings, Allie and Phoebe with whom he associates it with innocence and. Therefore, as evident in both strictly ballroom and the catcher in the rye, both characters were disconnected from society on their individual journeys to discover a sense of identity as well as a sense of belonging which lead to their self-fulfillment. A key to acceptance can be the key to belonging. The gradual interaction and acceptance of an individual?s surroundings can lead to a sense of inclusion and self-worth. ...read more.

Her instability is a direct result of her struggle to belong to a place. The symbolic gesture of drawing herself on the wall reveals a loss of connection to who she is meant to be, and consequently a loss of purpose and identity. The modality of this image is low, mirroring the uncertainty felt by the girl; the decontextualized background reinforces the lack of purpose she is experiencing. The book reveals belonging as a fundamental human need through her continual search; self-worth is essential to our development as individuals. Thus, Shaun Tan places us, as the readers in contact with the struggle of acceptance that an individual may experience in finding ones place in today?s busy world. Conclusively, the discovery and acceptance of oneself can therefore be argued to lead to self-fulfillment. These connections allow a person to be humane and to face challenges and overcome barriers within society. Baz Luhrmann, David Jerome Salinger and Shaun Tan, utilize these themes using a variety of techniques to effectively convey their ideas of belonging. It can be further determined that as writer John O?Donohue once said ?The hunger to belong is not merely a desire to be attached to something. It is rather sensing that great transformation and discovery become possible when belonging is sheltered and true?. ...read more.