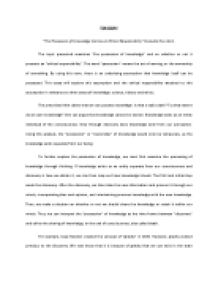 The Possession of Knowledge Carries an Ethical Responsibility (TOK essay)

﻿TOK ESSAY ?The Possession of Knowledge Carries an Ethical Responsibility? Evaluate this claim. The topic presented examines ?the possession of knowledge? and on whether or not it presents an ?ethical responsibility?. The word ?possession? means the act of owning, or the ownership of something. By using this term, there is an underlying assumption that knowledge itself can be possessed. This essay will explore this assumption and the ethical responsibility attached to this assumption in relevance to three areas of knowledge: science, history and ethics. The prescribed title claims that we can possess knowledge. Is that a valid claim? To what extent do we own knowledge? One can argue that knowledge cannot be owned. Knowledge exists as an entity individual of the consciousness. Only through discovery does knowledge exist from our perception. Using this analysis, the ?possession? or ?ownership? of knowledge would only be temporary, as the knowledge exists separate from our being. To further explore the possession of knowledge, we must first examine the processing of knowledge through thinking. If knowledge exists as an entity separate from our consciousness and discovery is how we obtain it, we can then map out how knowledge travels. The first and initial step would be discovery. ...read more.

Even though Einstein never wanted ? even apposed his science being used for warfare ? he wanted peace. He at one point in time possessed the knowledge that would eventually lead to the making of atomic bombs and the death of a lot of people. Although he never intended harm, he has indirectly caused countless causality. Even with positive intentions, Einstein carries a certain amount of guilt for the deaths caused from the destruction caused by the atomic bombs. Using this example, we can conclude that sharing knowledge can potentially lead to harm. Using this conclusion, can we then state that we are justified to retain knowledge to ourselves? While sharing knowledge can be dangerous, as proven in the previous example, some may argue that retaining knowledge within out consciousness can be just as harmful. For example, we can look at the quest to discover ?El Dorado? or ?the Lost City of Gold? in New Spain. The native people in South America told the Spanish Conquistadors tales of a city filled with gold, but neglected to enlighten them with the knowledge of the location of the alleged riches. The tale captivated to interests of Europeans and caused mass migration from Europeans striving to discover such a city. ...read more.