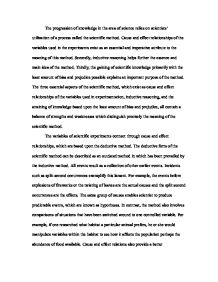 The progression of knowledge in the area of science relies on scientists' utilization of a process called the scientific method.

The scientific method carries the purpose to minimize outside influence, bias, and prejudice. In science there are many judgments and opinions of certain hypotheses which eventually graduate to theories. For example, two different scientists may be working on the same experiment. If one scientist expects one thing and the other predicts something completely different they may perceive observations in opposition. The human senses are not always the most reliable source. Furthermore, the attempt to avoid bias and errors does not always succeed. For example, scientists mistake the hypothesis as an explanation of the phenomenon without the completion of thorough experimental tests. Common sense and logic may interfere and create a belief that experimentation is unnecessary. The meaning of the scientific method is shown through cause and effect relationships, induction vs. deduction, and the attempts of yielding bias and prejudice in the science world. The scientific method is a process in which was set out in order to enable scientist to discover scientific knowledge with the least amount of problems of knowledge possible. ...read more.