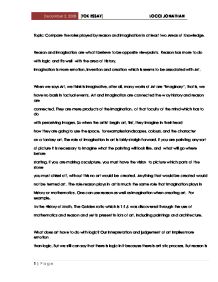 the roles played by reason and imagination in at least two Areas of Knowledge.

Topic: Compare the roles played by reason and imagination in at least two Areas of Knowledge. Reason and imagination are what I believe to be opposite viewpoints. Reason has more to do with logic and fits well with the area of History. Imagination is more emotion, invention and creation which is seems to be associated with Art. When we says Art, we think is imaginative, after all, many works of Art are "imaginary", that is, we have no basis in factual events. Art and imagination are connected the way history and reason are connected. They are mere products of the imagination, of that faculty of the mind which has to do with perceiving images. So when the artist begin art, first, they imagine in their head how they are going to use the space, for examples landscapes, colours, and the character on a fantasy art. The role of imagination in art is fairly straightforward. If you are painting any sort of picture it is necessary to imagine what the painting will look like, and what will go where before starting, if you are making a sculpture, you must have the vision to picture which parts of the stone you must chisel off, without this no art would be created. ...read more.

Reason plays a role in establishing what the event or situation is. Like telling a story, history requires a certain degree of creative imagination when interpreting the evidence, making it relevant and more human. Our knowledge of political relationships and motives behind important events in history are the interpretations of historians to explain the factual evidence. Trusting solely on imagination may seem to be a very unreliable method of drawing history. Limit must be set on the creative license of a historian and what he can recreate using his imagination, otherwise written history could become fiction, giving power to historians to create 'truth'. Colin Powell told the UN on February 5th, 2003, that Iraq had weapons of mass destruction, basing his claim on the past documents and inquiries only to later admit that they "appeared not to be...that solid". Demonstrating the danger of relying on interpretations enhanced by imagination that are not backed by sufficient records. The creative imagination has a place in the study of history, but it must be balanced with scientific reasoning and analysis of the factual evidence. A historian can recreate the atmosphere of a war, bringing the emotions to life, but cannot abuse his position by creating a reality that is pure speculation or has very little founding in fact. ...read more.

But when you mix the two of them even if they are opposite, they can fit together because you can have hypothesis like when historians think that it could be true and we think that it is possible so we use reason and imagination as well. In Art I think it affect our thinking as well because when you mix imagination and reason together , there is a meaning behind the piece of artwork, and it make people think about it, and that what artist want too. For example, Picasso and his work "Guernica", There is a hole process in this painting because it's means something and that where we use reason in Art it's to understand what the painting is about. Reason and imagination are two entirely different things, but they are not separate. In human science like history, reason is prevalent but imagination is also there. In the Arts, imagination is the more dominant of the two, but reason still has an important role. In the Natural Sciences, reason and imagination play varied roles, sometimes one is more prominent, and sometimes the other is. They always affect each other. Word Count: 1322 Sources: http://www.mathsisfun.com/numbers/golden-ratio.html http://fr.wikipedia.org/wiki/William_Shakespeare http://fr.wikipedia.org/wiki/Art http://www.philagora.net/philo-bac/anthrop90.htm http://www.barbery.net/philo/imho/imagination-kant.htm The TOK Retreat Workbook ?? ?? ?? ?? 4 | Page 3 | Page December 2, 2008 [TOK ESSAY] LOCCI JONATHAN 1 | Page ...read more.